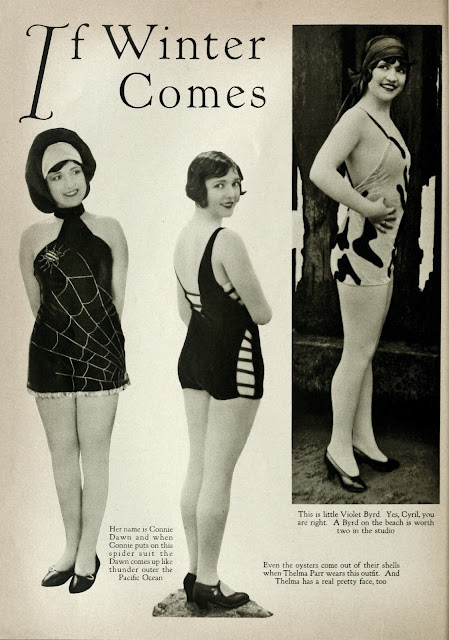 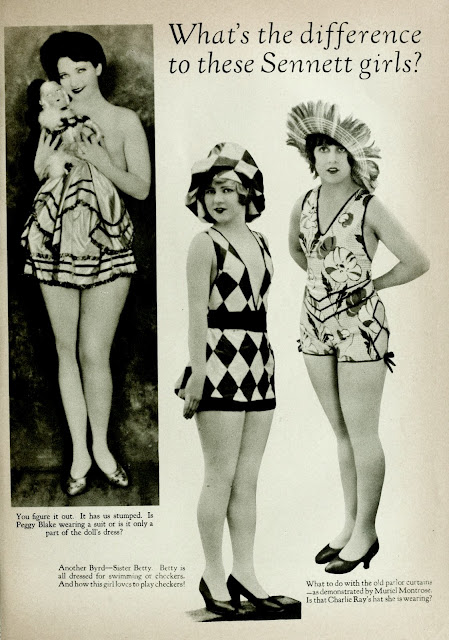 Whoops, just realized I haven't posted in a couple weeks. This short little post will have to do until work slows down a bit! Aren't their bathing suits adorable?! I'm not sure which is my favourite. I think I'm torn between the checkered one and the spider web one.
Posted by Kate at 6:19 AM 3 comments: Links to this post 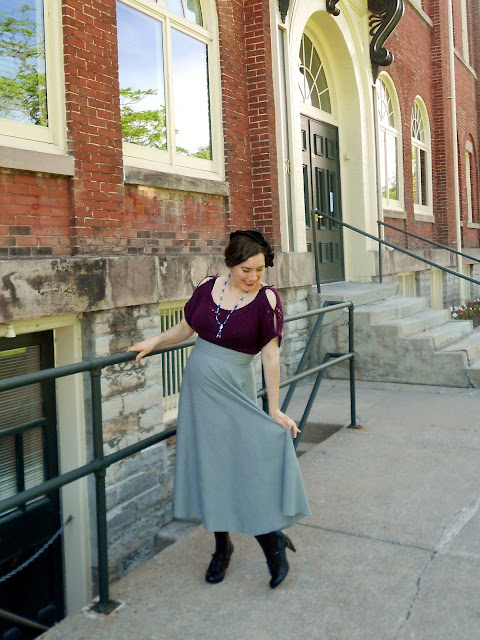 My birthday was weeks ago, but I completely forgot to post the outfit photos until now. Whoops. Anyways, my parents treated me to a day in Port Hope on my actual birthday. We ended the day of antique shopping with coffee just down the road in Cobourg (the two towns are only a few minutes drive from one another). Cobourg has my favourite coffee shop, which always has the most amazing cakes and tarts, quirky but elegant decor, and classical music playing the background. It's simply wonderful!

My outfit is a mix of 1920's and 1930's styles. I knit the sweater loosely from a 1920's pattern (same shape, different gauge and stitch pattern). The skirt is 1930's in inspiration (also me-made), and the hat is a vintage piece from the 1930's (I wish I had a better shot of the hat as it's my favourite, but it had slipped down my hair quite a bit by the time these photos were taken).

I also wore my new necklace, which I made about 30 minutes before heading out the door. It was inspired by some 1920's necklaces I had been lusting after on Etsy. I love real vintage jewelry, but I'm always hesitant to wear my pieces out of the house in case they accidentally fall off somewhere. With me-made jewelry I know that I can always just make another one if something happens to it. 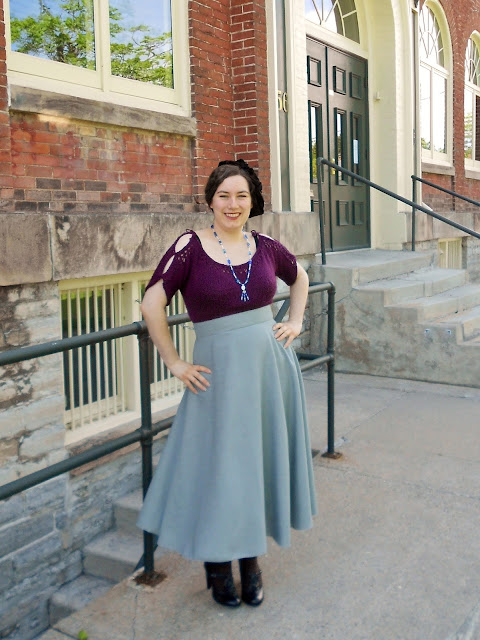 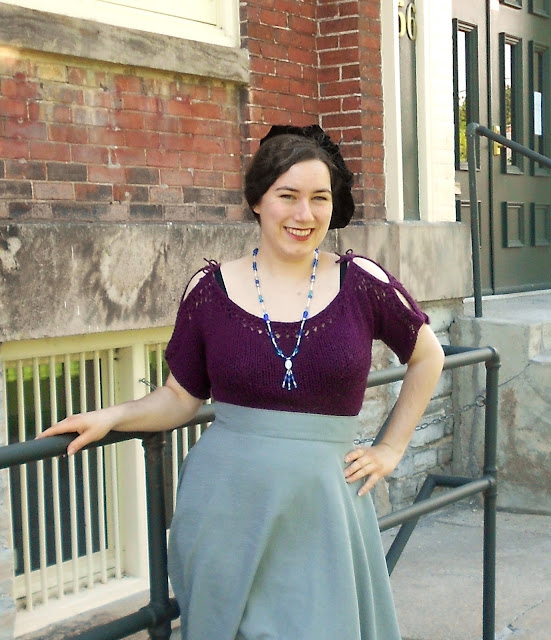 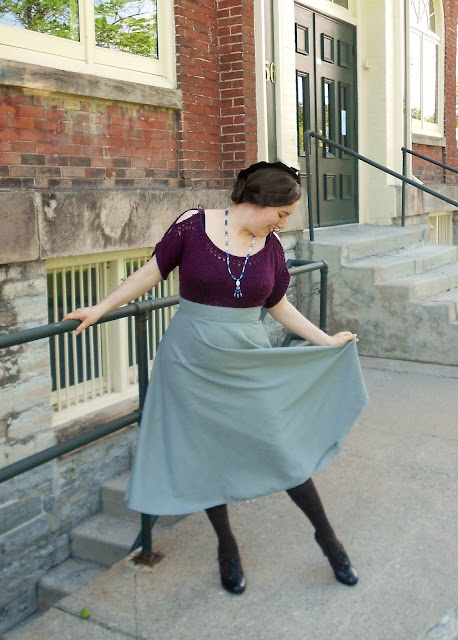 I snapped these few quick outfit shots outside the historic Port Hope town hall. Isn't she a beauty?! I do love Victorian architecture. 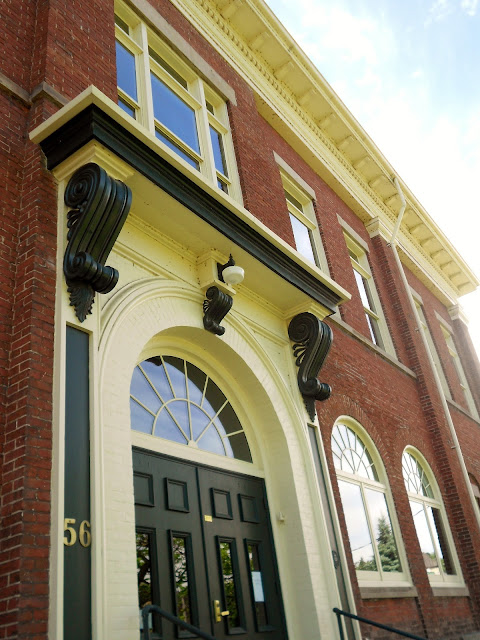 I've actually been touring a few Victorian buildings lately. A friend and I went to the local "Doors Open" event a few weeks ago. "Doors Open" is an event that takes place in various towns across Ontario and gives you a chance to tour local buildings of interest. They are often historical or otherwise important, and may include a few private homes! I just love poking about in other peoples houses. We toured an adorable stone church, a couple houses, and the local "castle". 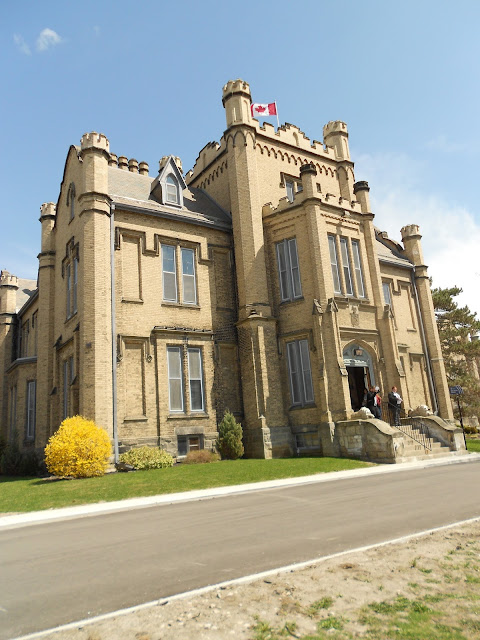 Trafalgar castle was built as a private home in the early 1860s and converted to a ladies college in the 1870s. The original owner, Nelson Gilbert Reynolds, served as the Sheriff of Ontario County. The building cost a fortune to construct and he had to sell it only a few years after completion, likely due to gambling debts. He was actually quite the colourful character and had a total of 24 children (there were rumors of a few illegitimate children as well).


Over the years there have been a number of additions and renovations, but I was quite impressed with how many of the original features were preserved. It was too dim inside to take many pictures, but I snapped this quick shot of the main staircase: 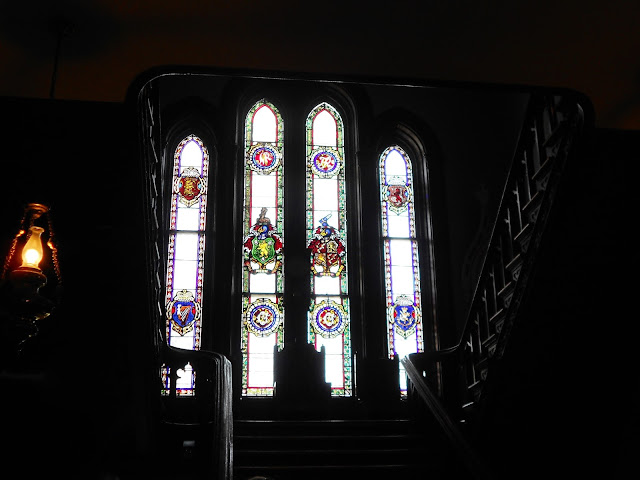 Here are some great historical shots of the castle I found in the local archives: 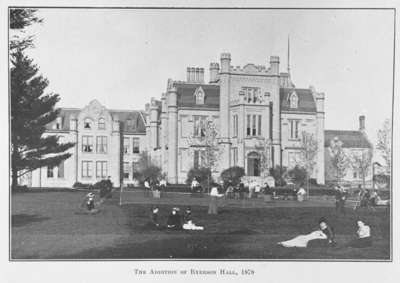 Some of the additions were added in 1887. A few years later, you can see another wing was added to the building: 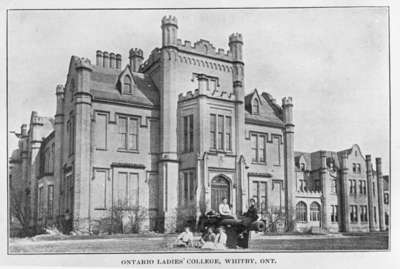 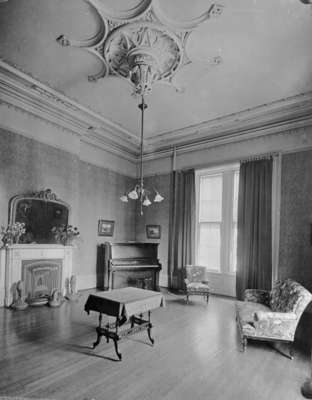 One of the reception rooms in 1919. It still looks quite similar, only with different furniture now of course. Check out that amazing plaster work on the ceiling! 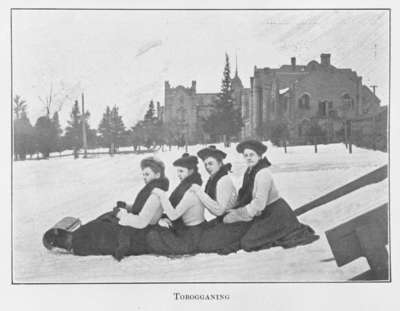 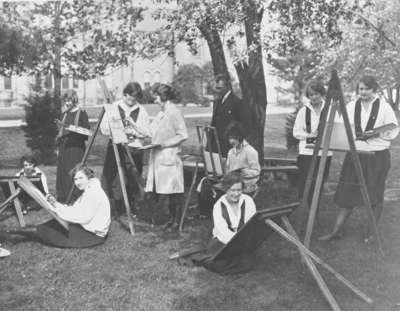 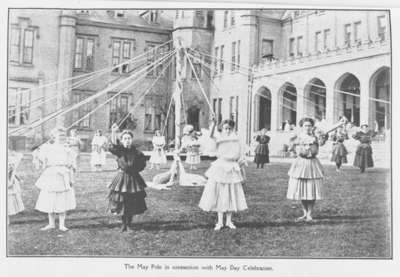 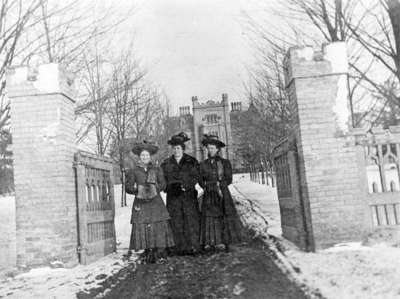 The college is doing a great job preserving this lovely historical building. I am so glad that such an impressive building has a dedicated group of people taking care of it. A few years ago when the plaster work needed repair, they spend the time, money, and effort to have it repaired properly by a local master-craftsman. There have been renovations and updates over the years, but for the most part they have been done with a lot of respect for the original building. There are so many local historical buildings that have been left to rot and decay, or have been "renovated" beyond recognition. It does my heart good to see at least some people are still working to preserve the past, while still using the building to serve the present.

I have such a deep love of historical buildings. Preservation is so important and so often ignored. I have been known to yell at the tv whenever I watch renovation programs where they rip out original features (that's the reason the only show I watch anymore is Rehab Addict. Nicole Curtis is amazing).

I received a book of "interesting places to visit in Ontario" for my birthday, which lists a bunch of historical sites and ruins. I'm hoping to get a chance to check out some of the historical sites while they are still around. I have a bunch of day-trips planned out, but they will have to wait until August when work slows down a bit (I actually have a number of tutoring students doing summer school this year!).

Anyone else visit any interesting historical buildings recently? 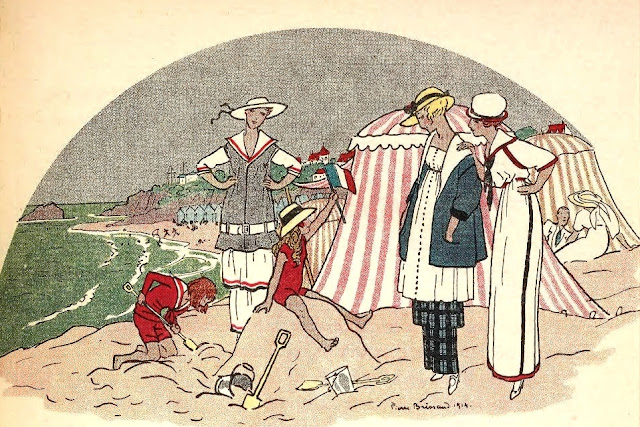 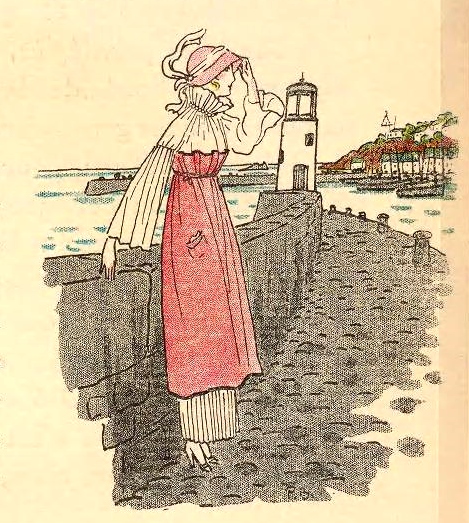 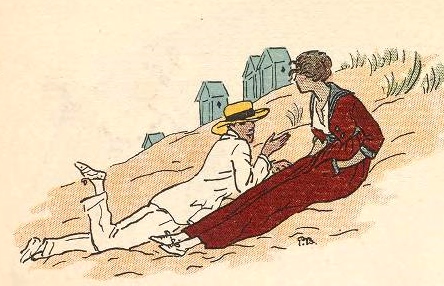 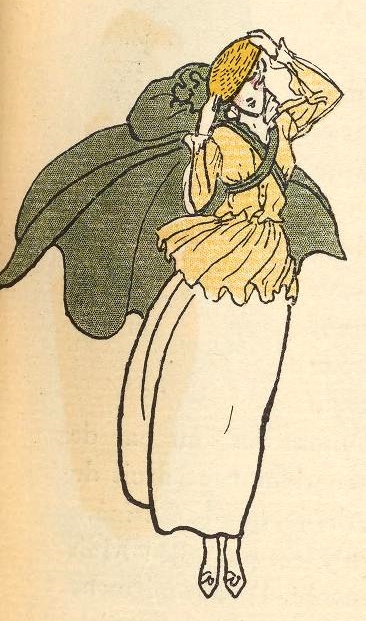 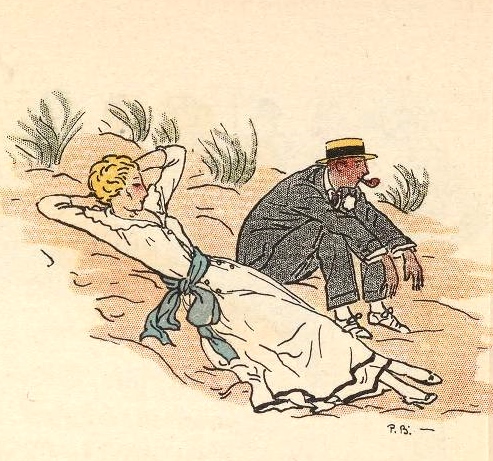 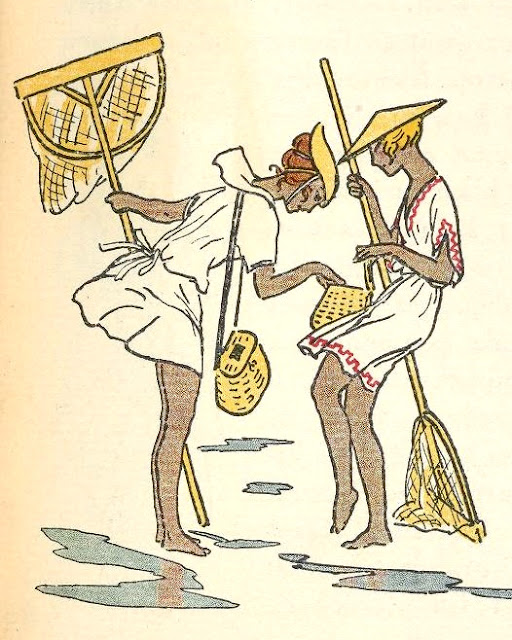 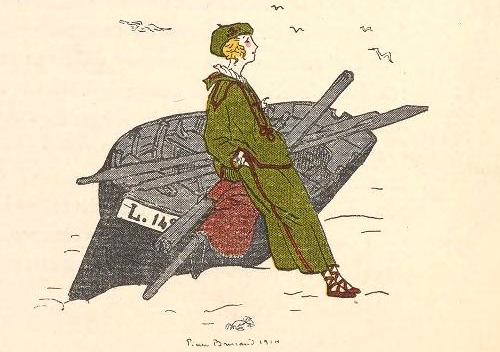 I just bought a huge bunch of fabric and am so excited to get working on some new pieces for the shop. Unfortunately my blood pressure is still an issue, which means until my specialist appoint in a couple weeks I'm taking it easy and focusing more on the design side of things. I've been very inspired by the fashions from the late Edwardian and early 1920's recently. The fashions of the late 1920's are very sleek and glamorous, but I love the femininity of the earlier designs. There is something almost naive about them, and they have this a great mix of the earlier Victorian style with the very beginnings of the flapper era. I'm also a sucker for unique draping and a large amount of fabric, so a lot of the early designs really appeal to me.

I hope everyone is having a great week!