As promised, here is the second edition of the vintage vegetarian recipe experiment. (I actually made this at the same time as the last one, but split it into two posts to give proper attention to each recipe.) This recipe is for a cup custard and is taken from the "invalid" section of a Victorian cookbook. There is a fairly large section dedicated to "invalid cooking", which makes me suspect that a vegetarian diet may have been recommended for those with a delicate constitution. Either way, I love simple recipes and decided to give this one a shot.

My initial thoughts
This is from the "invalid" section of the cookbook, so I expect it to be rather plain. I have been sick lately, so this seemed liked a good fit at the moment. I like that the amount or type of sweetener is not specified. That likely means it is not required for the custard to set properly, and leaves me free to substitute some of my home-grown stevia powder. Overall, the instructions look fairly simple.

The Ingredients
(for one larger serving, or two smaller ones) 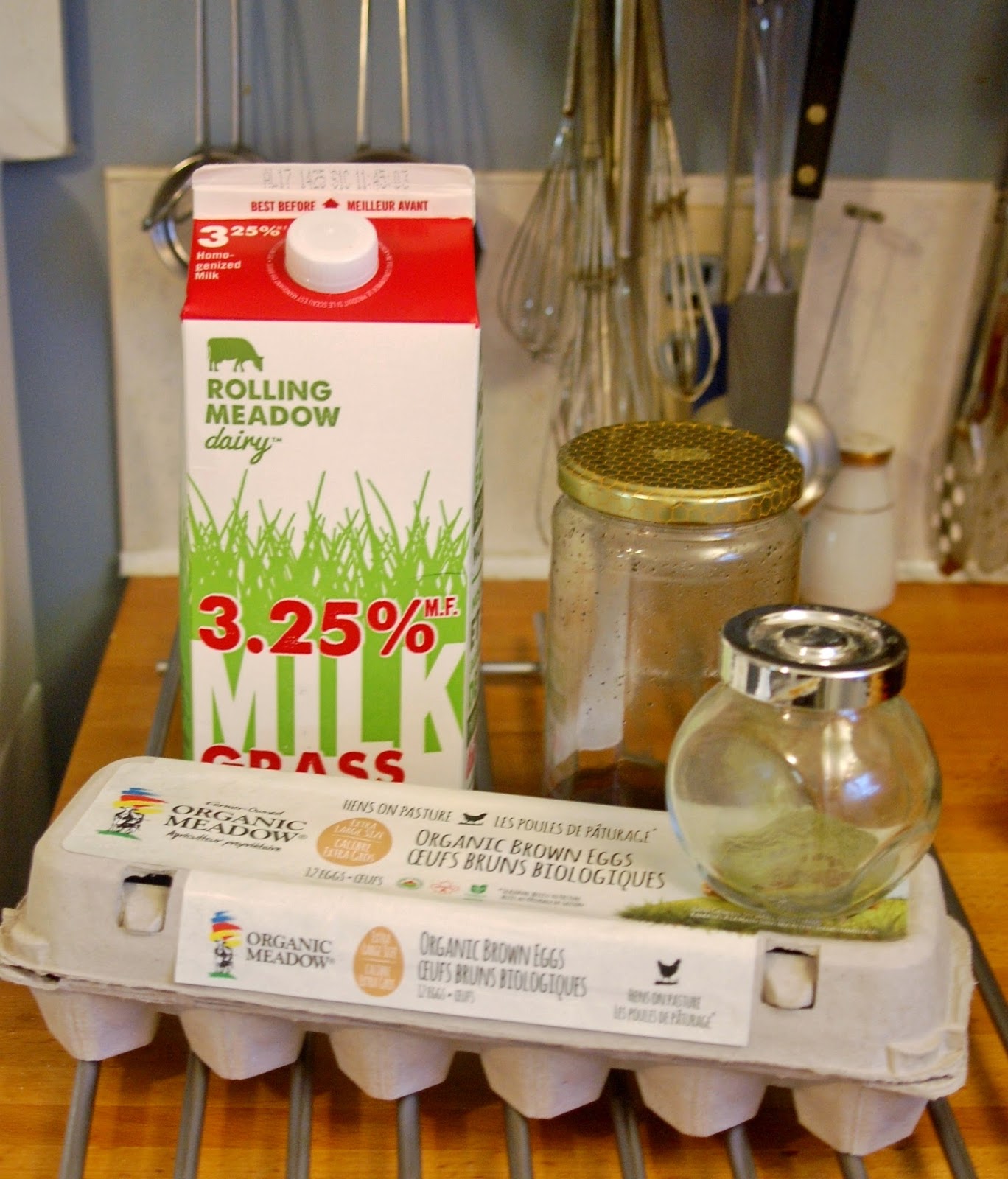 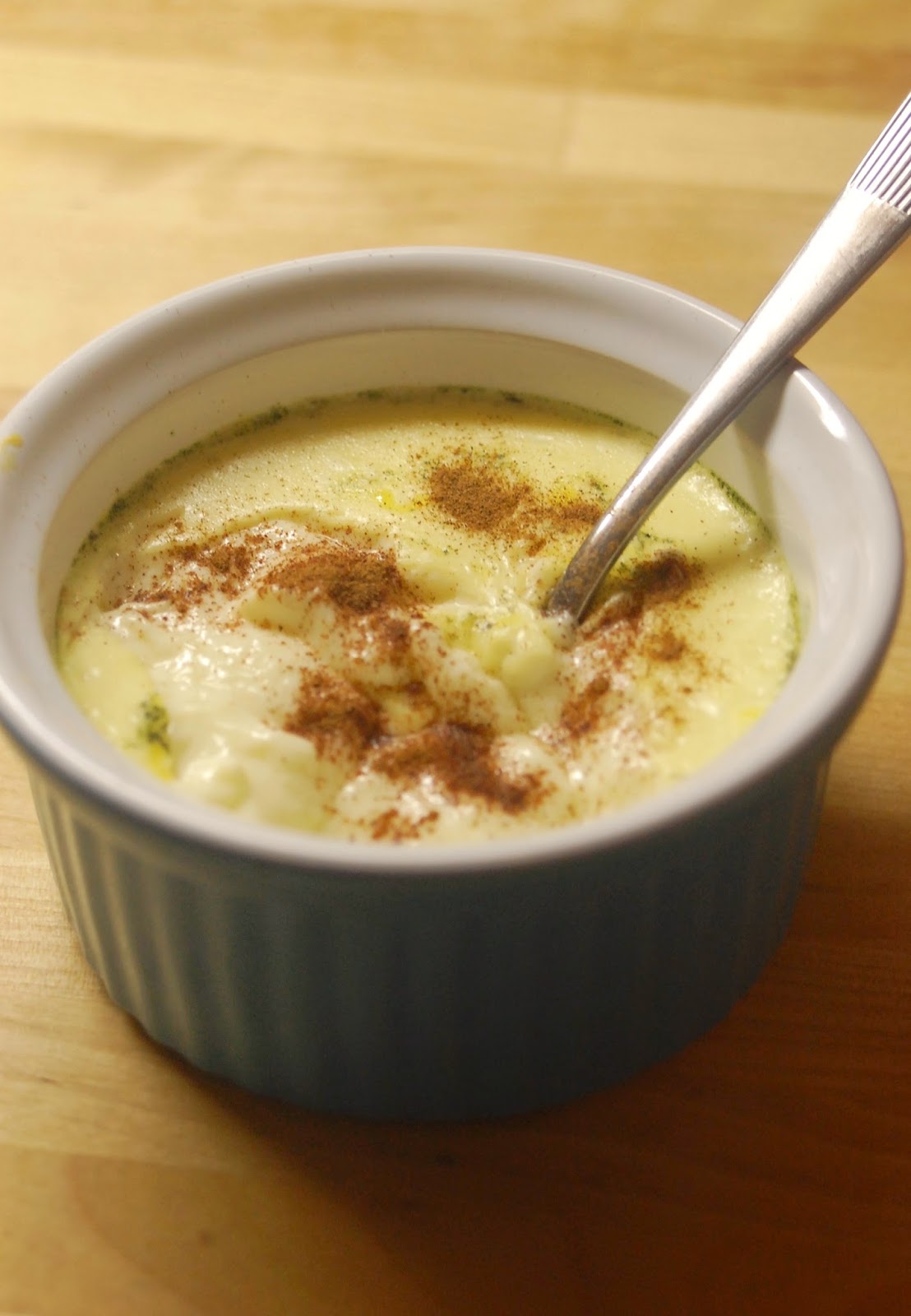 Actually, really good. There was a slight skin on the top, but I like "pudding-skin" so this wasn't a problem for me. The custard was very creamy and soft/silky.  I did put a bit of cinnamon on top, as it is quite plain on it's own. It would be marvelous served with a bit of fruit sauce (such as pear sauce). I had the other one later with a bit of honey and blueberries, and it was quite delicious!

I will definitely be making this recipe again. Prep time took about 2 minutes and it can be left to cook while you eat dinner. It makes a perfect weeknight dessert, when you don't have much prep time and want something simple. If you wanted to make a larger amount, the recipe can easily be doubled or tripled.

In honor of Earth Day, I'm sharing this adorable book from 1910. It features illustrations of "flower children". I love how the flowers are re-imagined as dresses and hats. Some of these would make fabulous costumes!

I'm getting the overwhelming sense that pretty soon my life is going to go through some big changes. I can't really say what changes, as I don't actually know yet. But within the next year there will be some sort of shift in career, home, and lifestyle. It's kind of freaking me out a bit. So I've been taking the time lately to indulge in little luxuries to help make this time of uncertainly a little calmer. I never spend a lot on big treats, but sometimes the simple things are those that matter the most...

...such as having a leisurely tea with one of my favourite teacups... 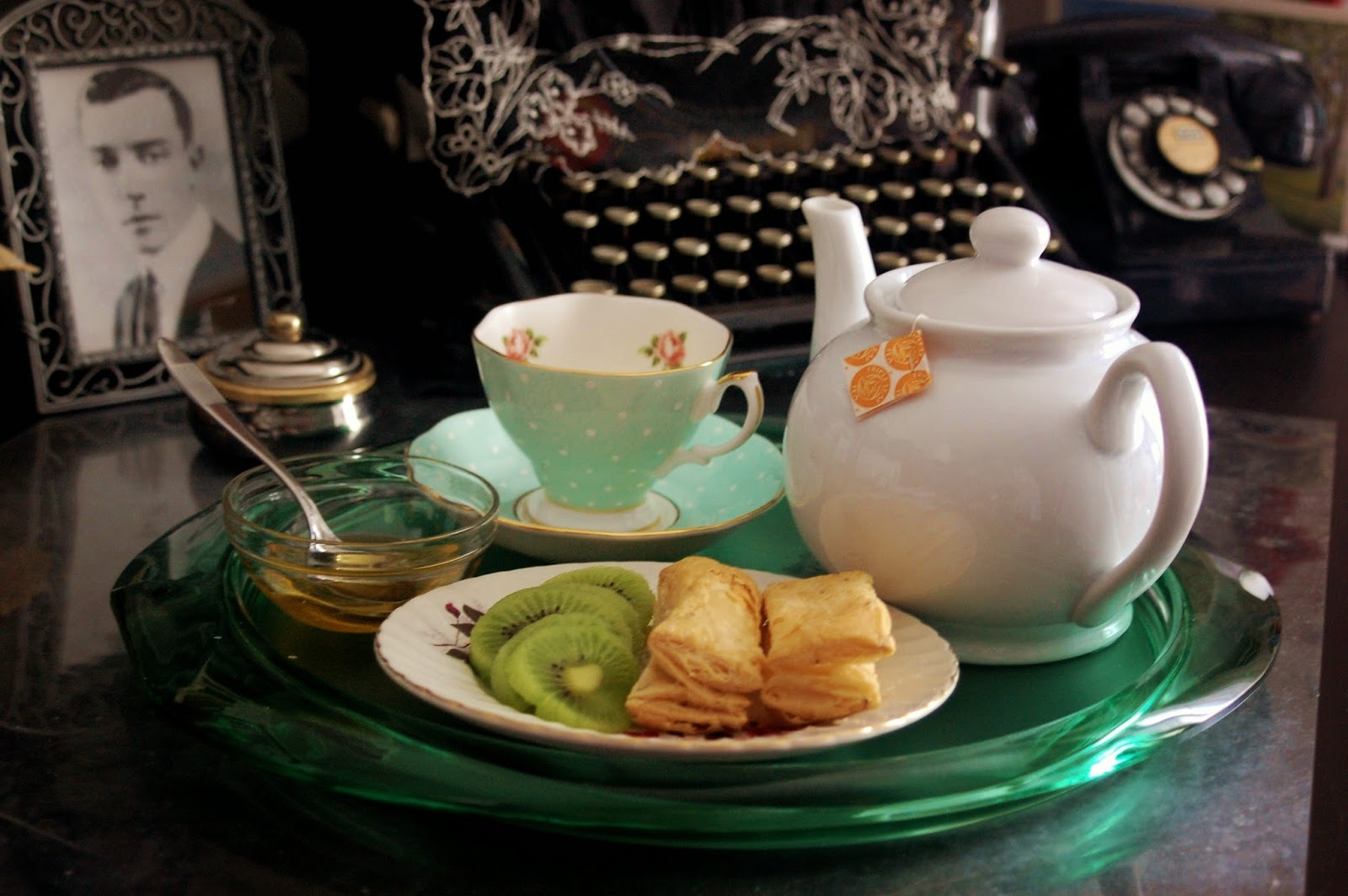 ....spending time with Aggie...
...and of course getting dressed up to go antique shopping. 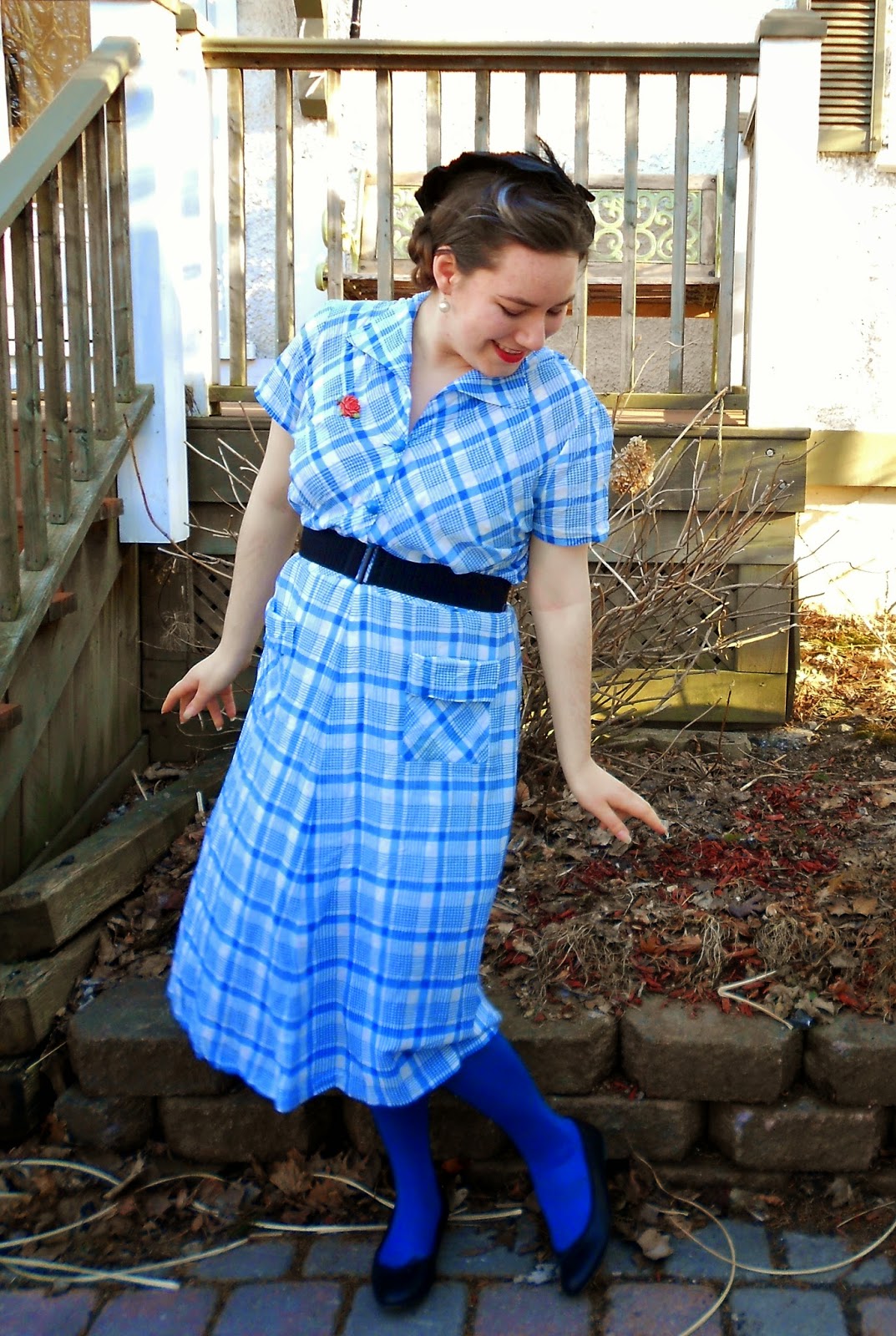 I love this vintage dress, but only wear it a couple times a year due to the fragile nature of it's seams (every time I wear it some stitches pop and I have to repair it). I paired it with a vintage brooch, a 1930's hat, some bright tights, and a homemade belt. I tried doing something different with my hair, but it was a little messy by the time I got around to taking photos. It really shows off my grey-streak which I have mixed feelings about. While I actually quite like my grey-streak, I am rather young to have as many grey hairs as I do. It ages me a bit, but I can't bear to dye over them. 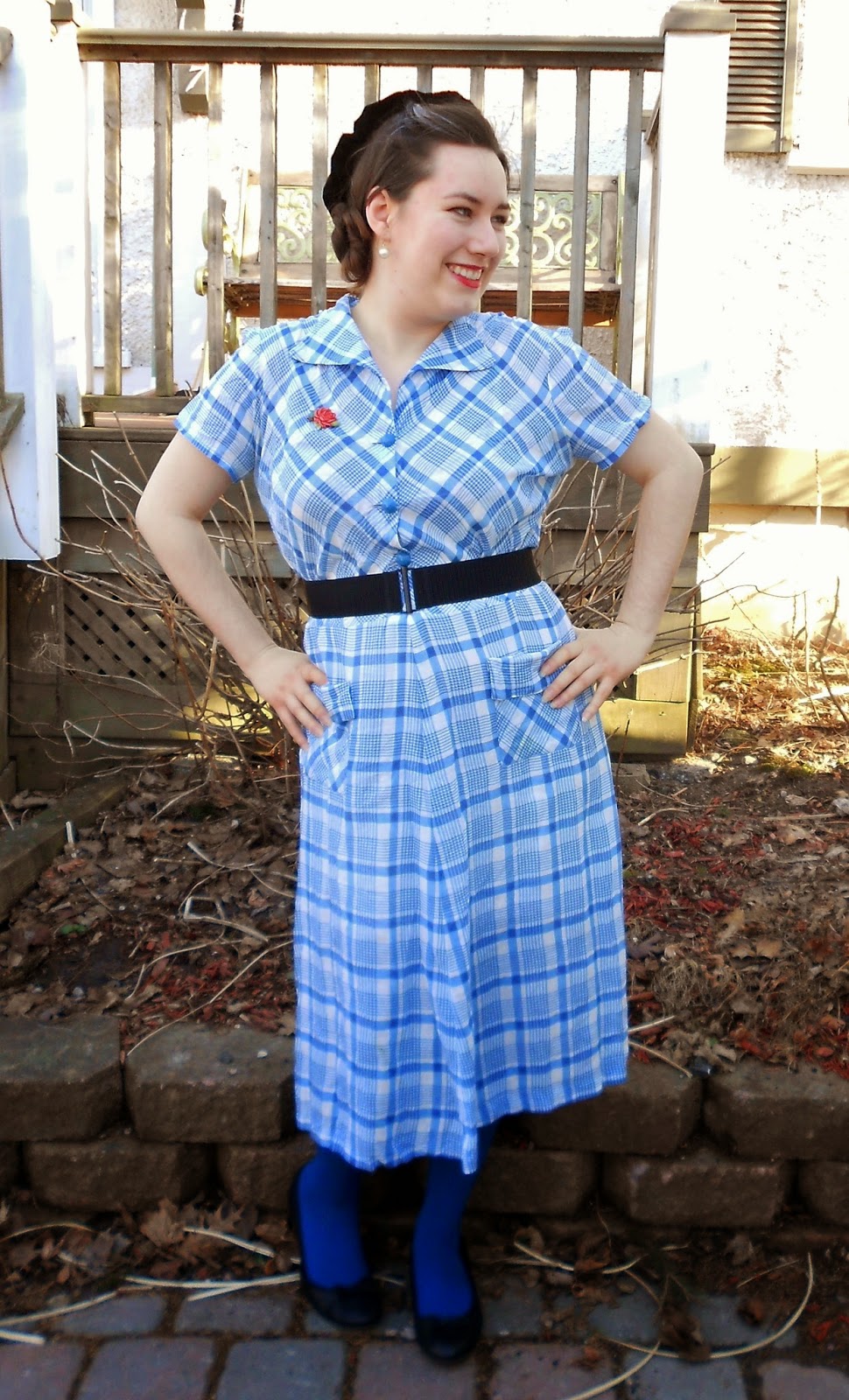 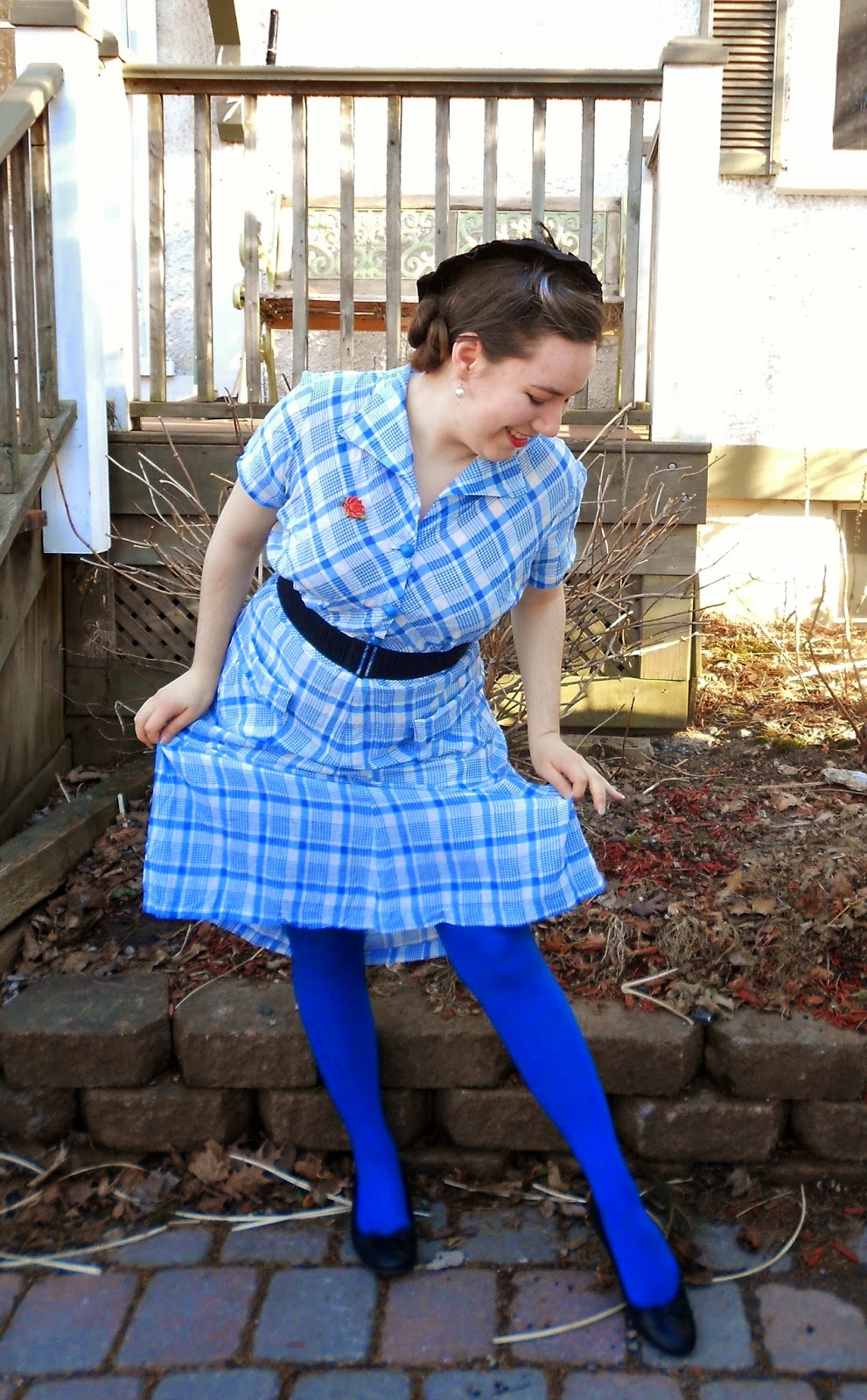 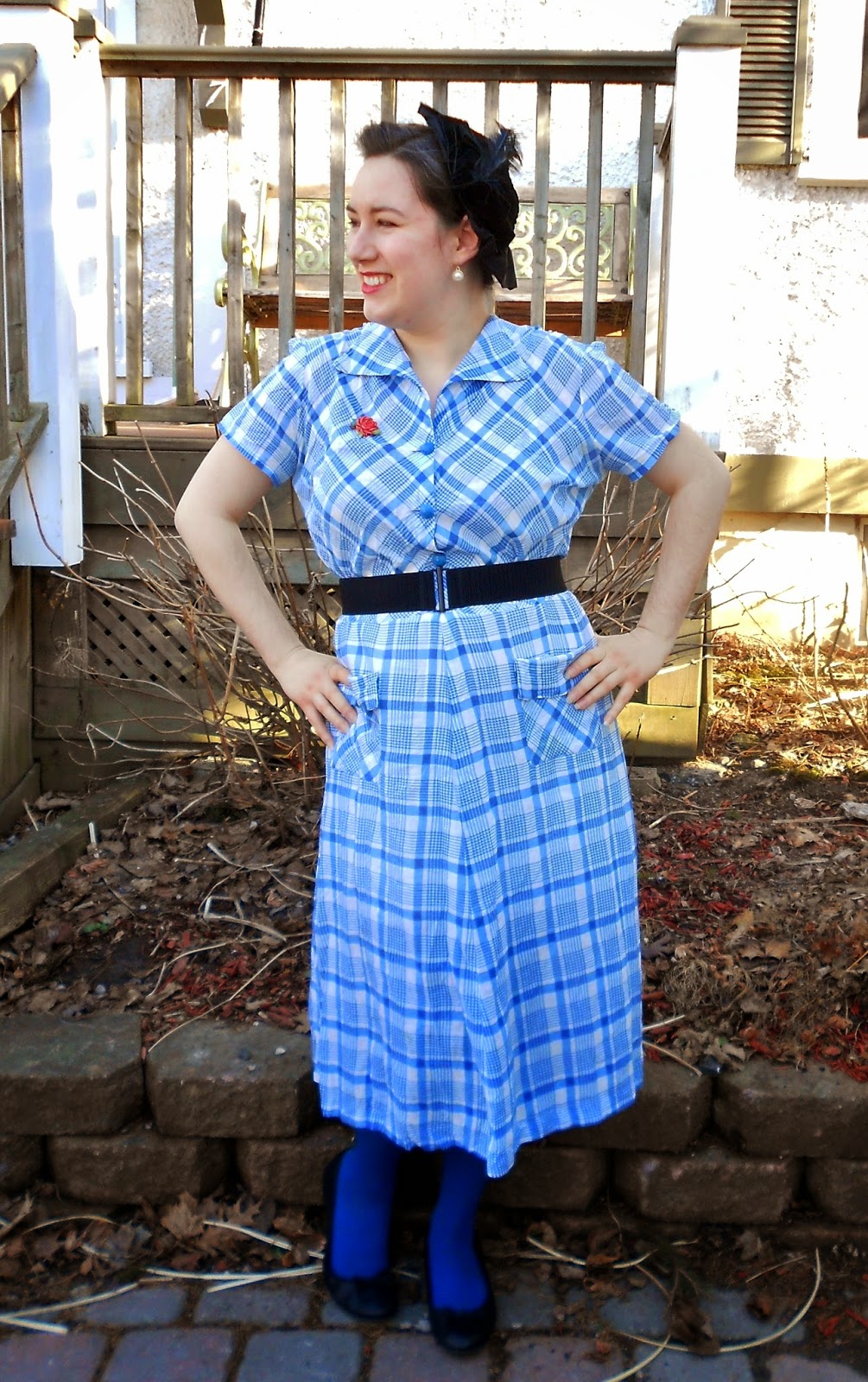 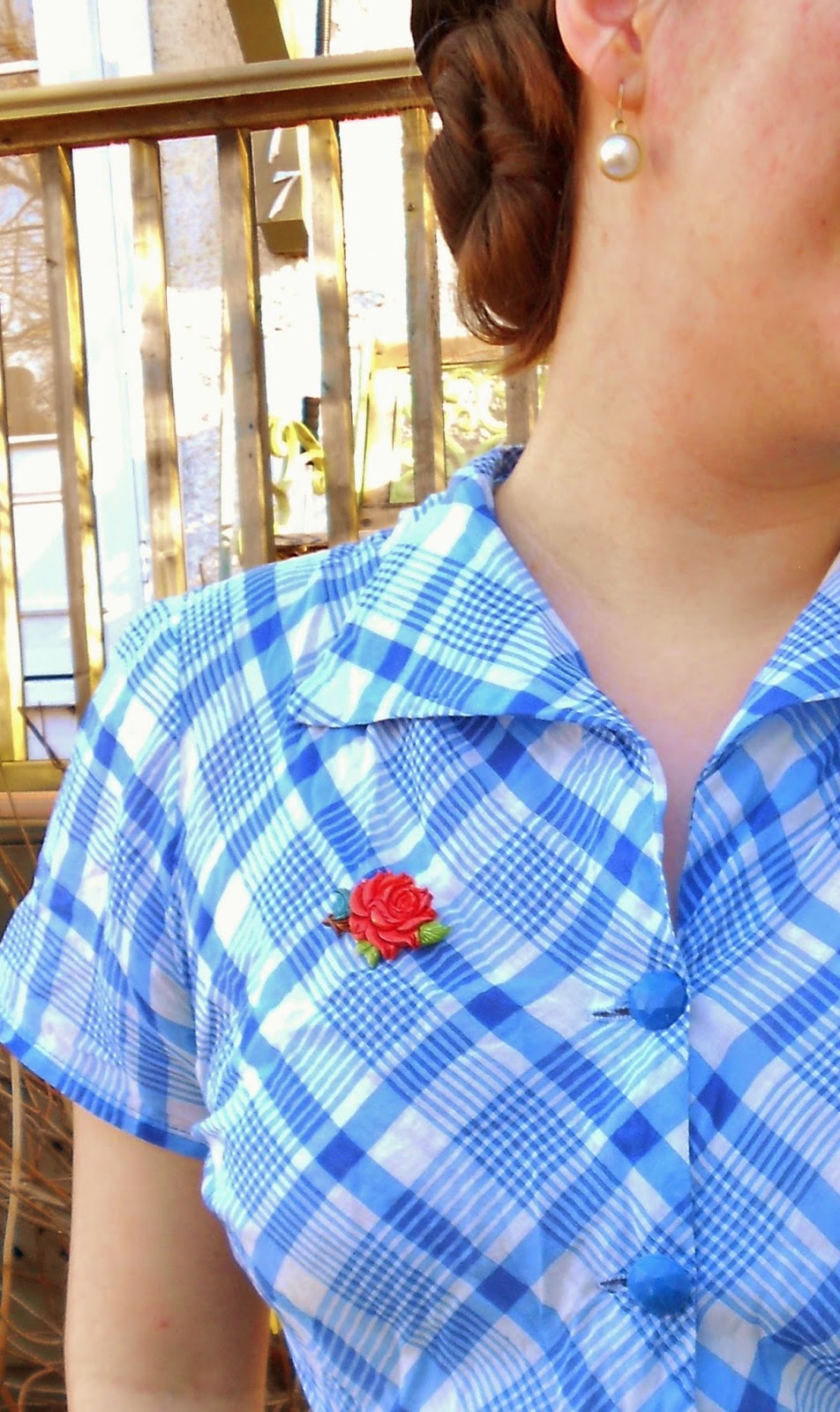 Britt picked me up, and we had a wonderful afternoon looking at antiques and savoring some great coffee afterwards. It was a little chillier than expected, so she borrowed my cape. 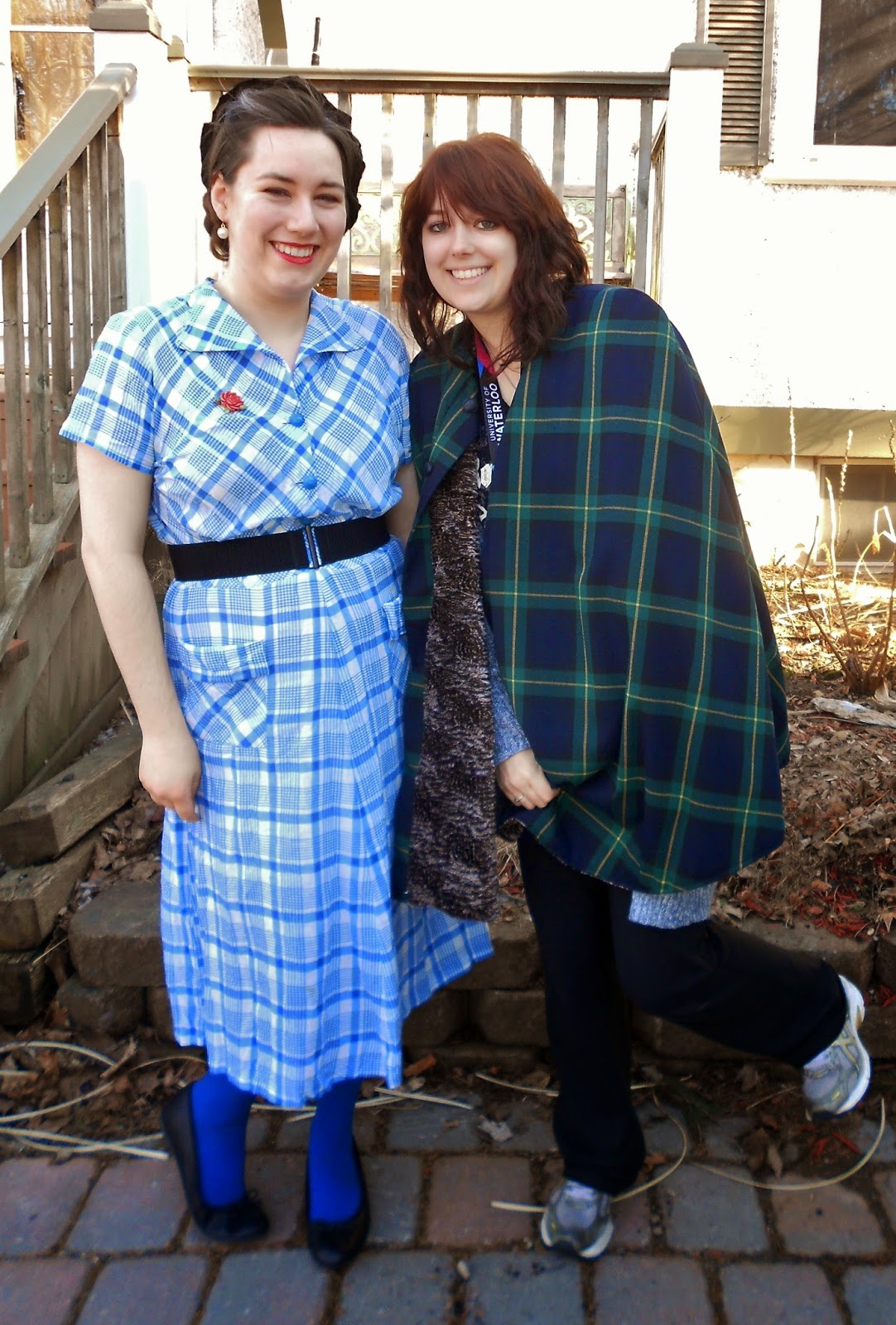 My purchases for the day included a postcard, a nightgown set, and a teacup. It's been a long time since I've found a teacup that is just so "me" that I have to buy it. I love teacups but normally have the willpower to leave them in the store. Not so with this beauty. I'm saving her for my birthday in June, so she will remain hidden away for a few months. The nightgown set I'm going to use right away, but I want to try styling it as a dress. It is a beautiful shade of mint green and will be perfect once the weather warms up a bit! 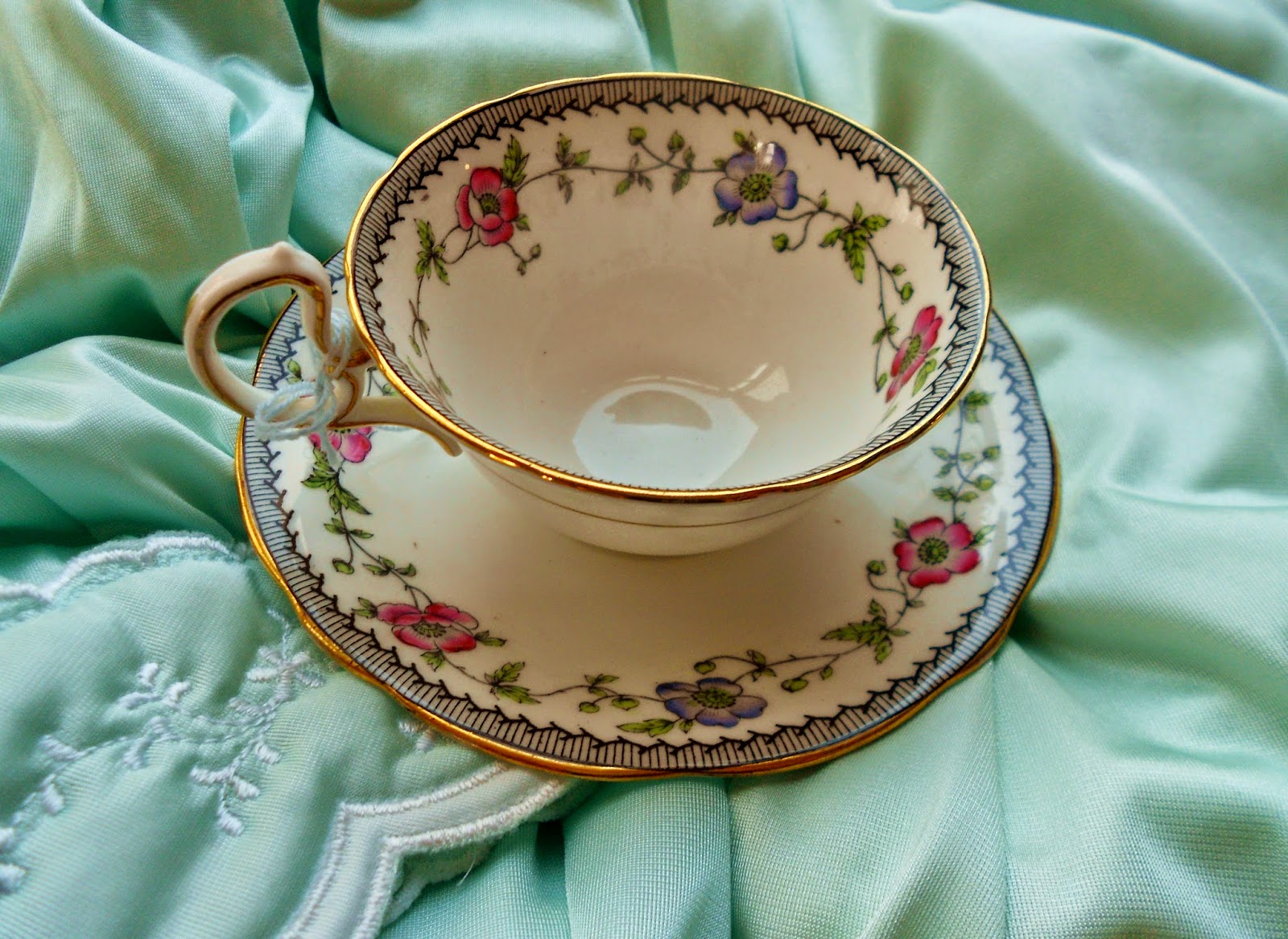 ~The Vintage Vegetarian ~ Macaroni and Eggs (1891)

I love spending time in the kitchen. This probably stems from a love of food, experimenting, and trying new things. I rarely make the same thing twice, and I'm always substituting new ingredients into standard recipes. I've long wanted to try some historical recipes, as they are often vague and seem like a fun challenge. But here's the problem: I'm a vegetarian, who eats very little sugar, and try's to limit processed food as much as possible. The processed food condition isn't too much of a concern since pre-1930's recipes are almost entirely free of processed ingredients. But finding recipes that don't use meat (or meat-products such as suet) and are sugar-free is much more difficult.

But then I had a thought. Vegetarianism has been around a long time (some sources date it back to 6th century BCE) and had a resurgence of popularity during 19th century. There must be some historical vegetarian cookbooks out there!

I went to Archive.org to do a bit of research (I seriously love that site. It is a wonderful source for free vintage music, movies, digital books, etc). They actually have a number of vegetarian cookbooks from the 19th century and early 20th century. Yay!

So I've decided to launch a new series of posts called "The Vintage Vegetarian", where I try out recipes from old cookbooks. I've tried two so far (including the one in this post) and am looking forward to trying some more. If anyone has any requests or suggestions, please feel free to leave me a comment. I really have no idea what to do when it comes to "food blogging" so I will be making it up as I go along. Now after that rather long intro, lets get cooking! 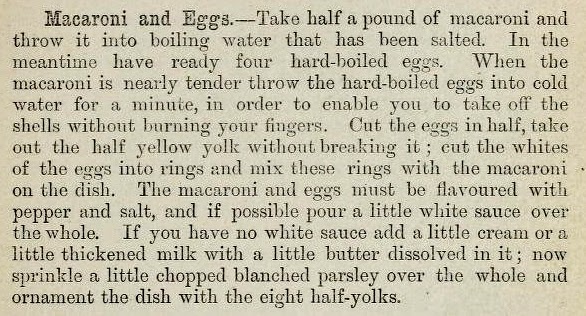 My initial thoughts
Well this sounds mildly revolting. Macaroni with eggs? No, macaroni goes with cheese or tomato sauce, unless you are making a macaroni salad (which I don't really like anyways). Not sure about how it's going to look either. Ornamenting it with egg yolks? Hmm... Well, we will see how this turns out.

I flipped through the book and discovered their "recipe" for white sauce contains no list of ingredients and very vague instructions. I'm assuming everyone was expected to know how to make a white sauce at the time. I don't, so I will borrow a simple recipe from my Country Cooking cookbook. 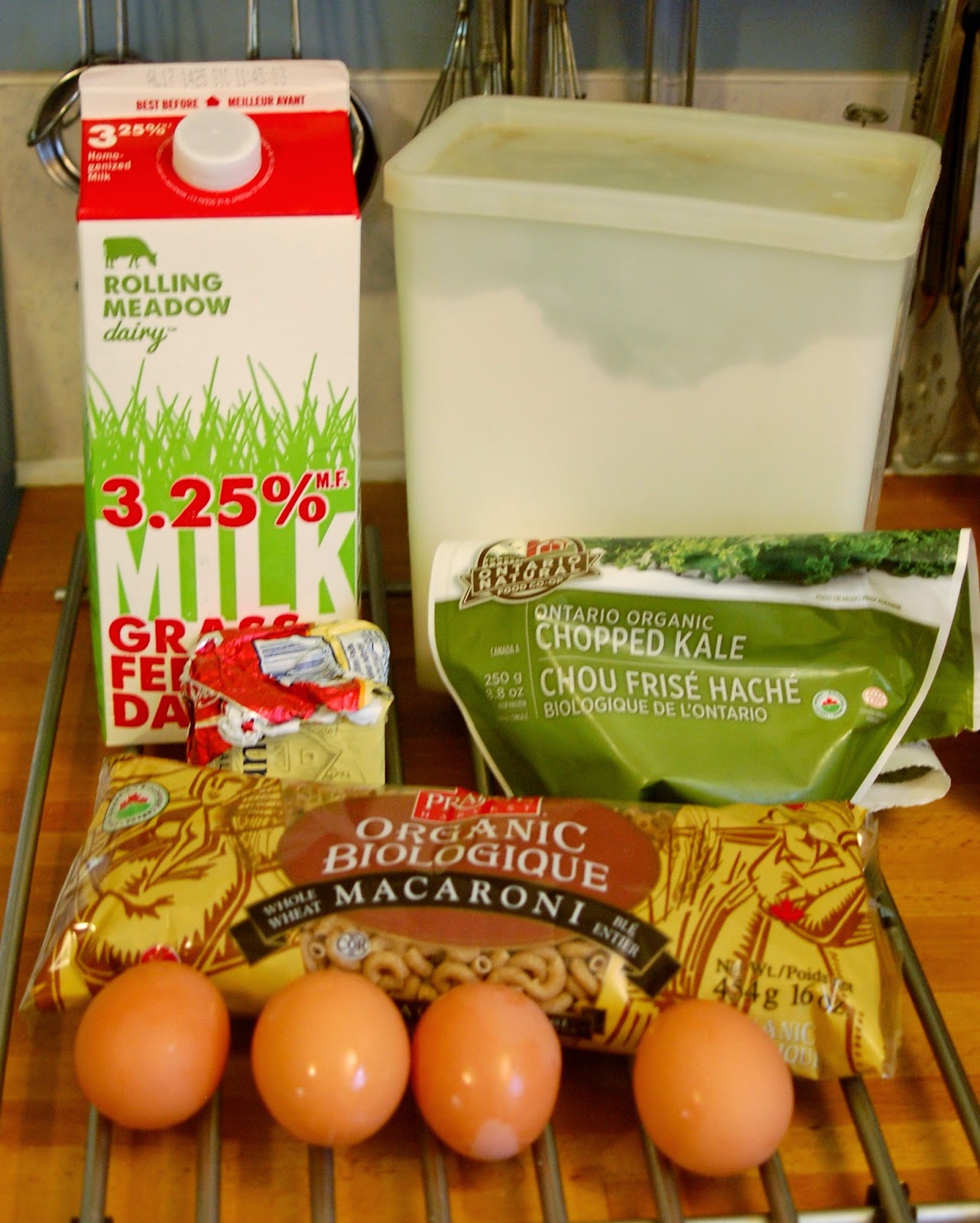 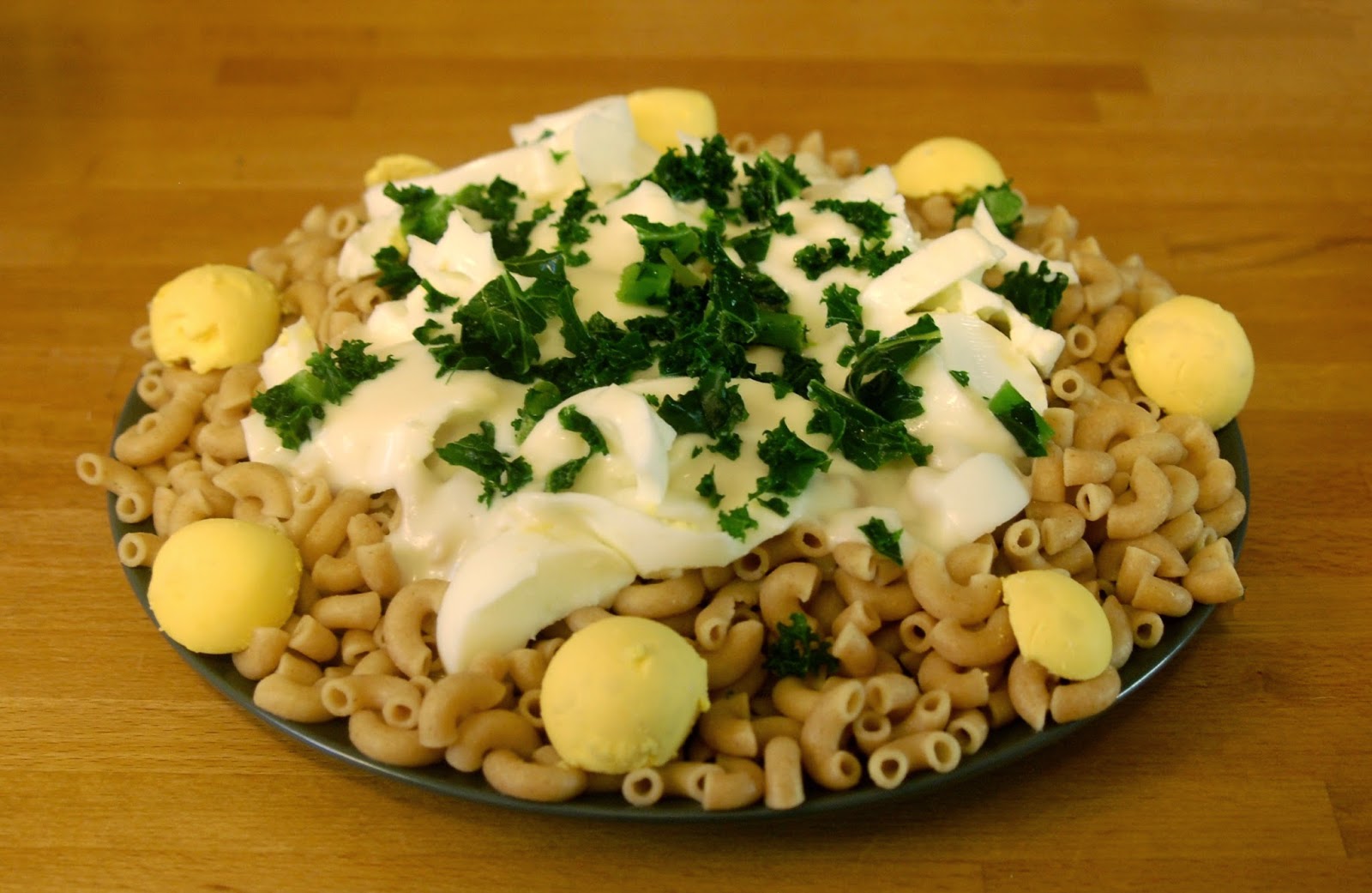 Yes, I know! It actually looks half-decent, much to my surprise. I definitely needed a larger plate though. This makes enough for maybe 6 to 8 people, (assuming you were serving some sort of side-dishes as well).

The taste? Well a little bland, but not as bad as I expected. It was rich and creamy, and not overly "egg-y". Some curry powder in the sauce would improve it, but it was certainly eatable as-is.

This would be an easy recipe to make dairy-free. Just swap the white sauce for some sort of coconut-curry sauce.

For my first attempt at a Victorian recipe, I thought it went rather well. It was really quite easy to make and has me all geared up to try some more challenging recipes! (Or not. I do tend to favor simple recipes...) On the next installment of The Vintage Vegetarian series, we will be making an "invalid custard".

Happy Easter everyone! I had a great outfit planned for today, featuring my homemade floral crown and a straw boater. Unfortunately, someone (you know who you are) infected me with strep throat. So instead of frolicking around in my Easter bonnet, I'm home on the sofa eating raw garlic and drinking ginger tea (which is actually surprisingly effective).

I had to take a few pictures of my hat, even if I don't get a chance to wear it this year (I may have to wear it out for coffee one day, just to give it an outing). I was planning on pairing it with these darling pink vintage gloves. 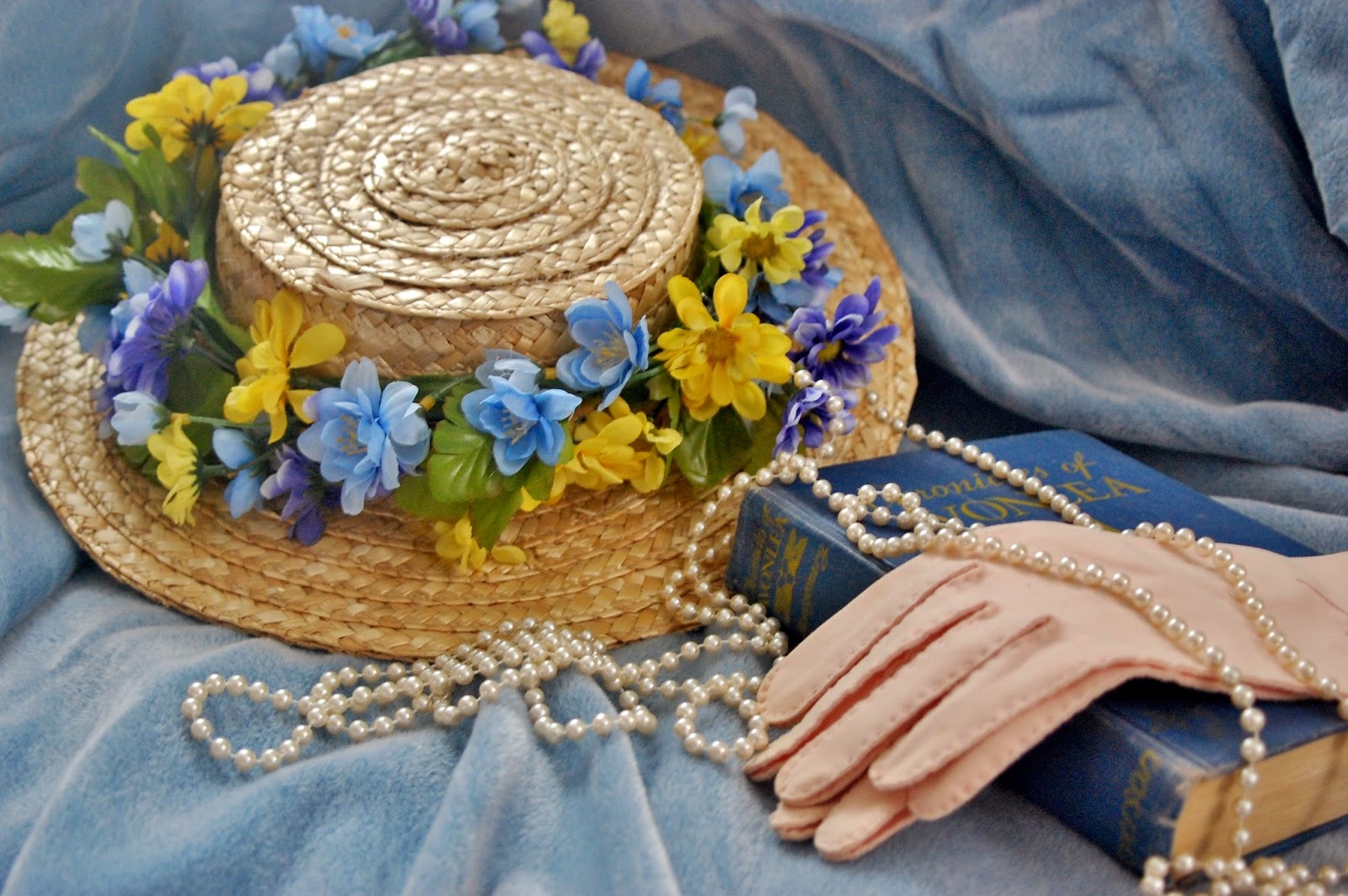 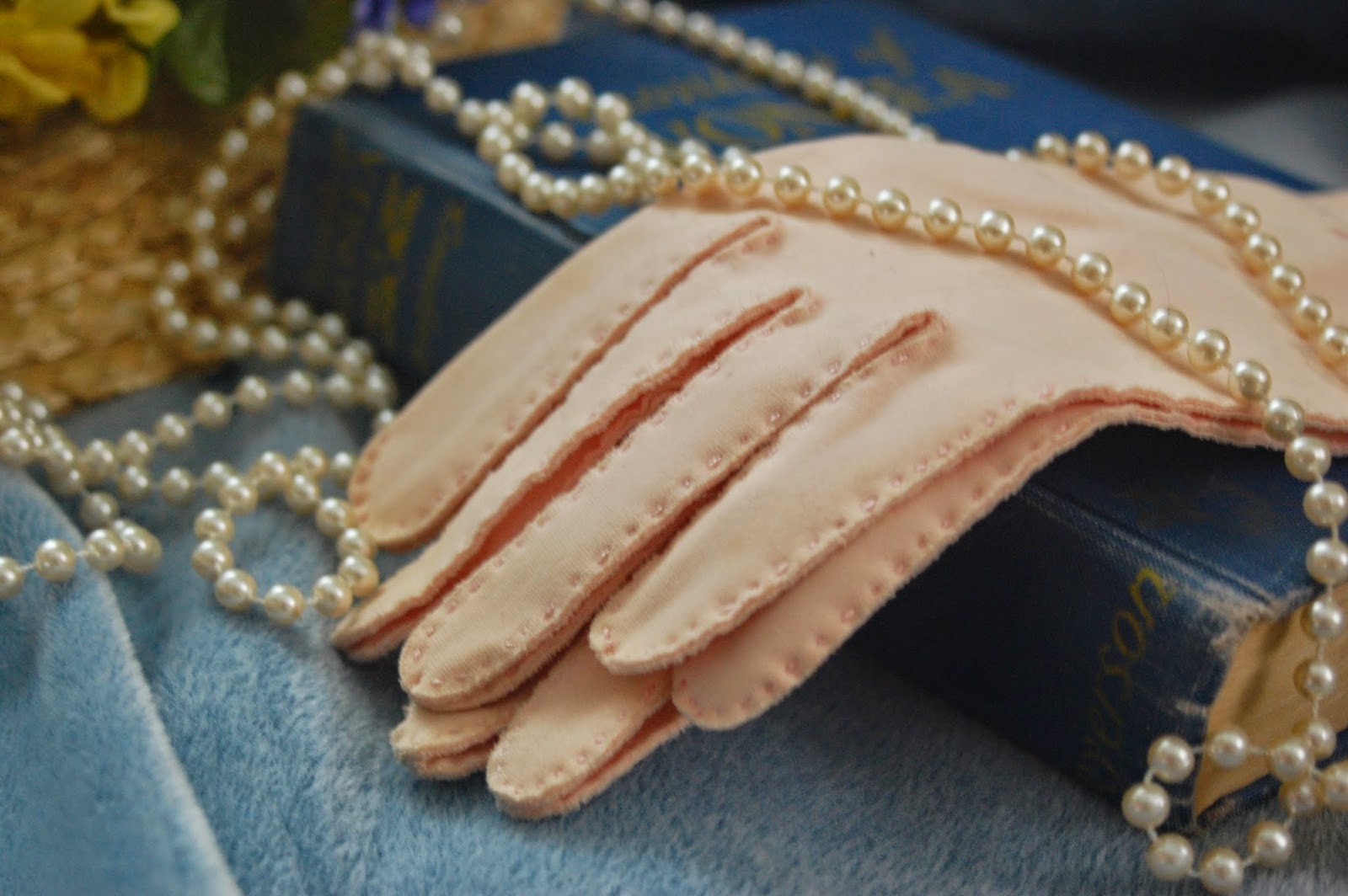 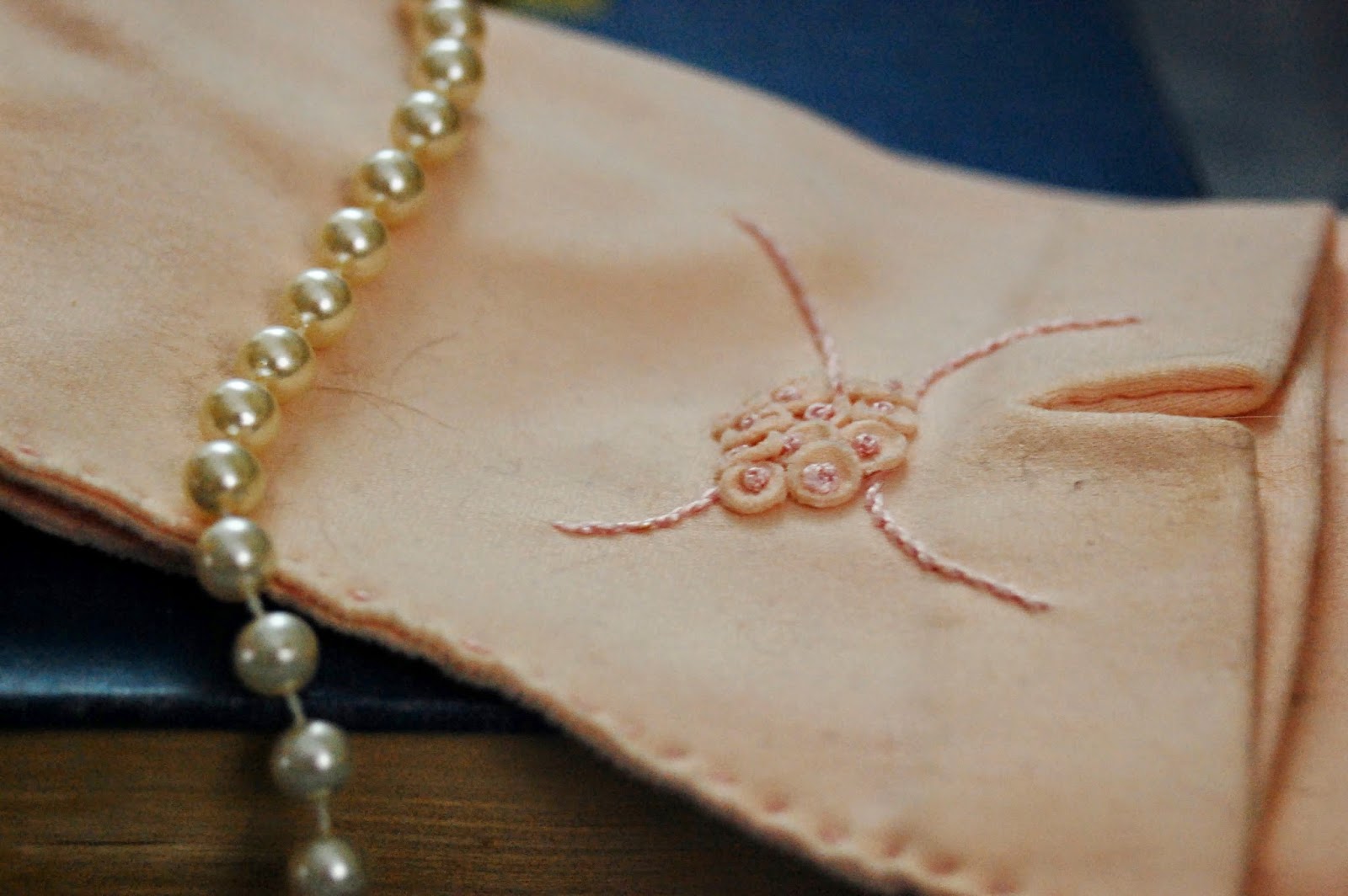 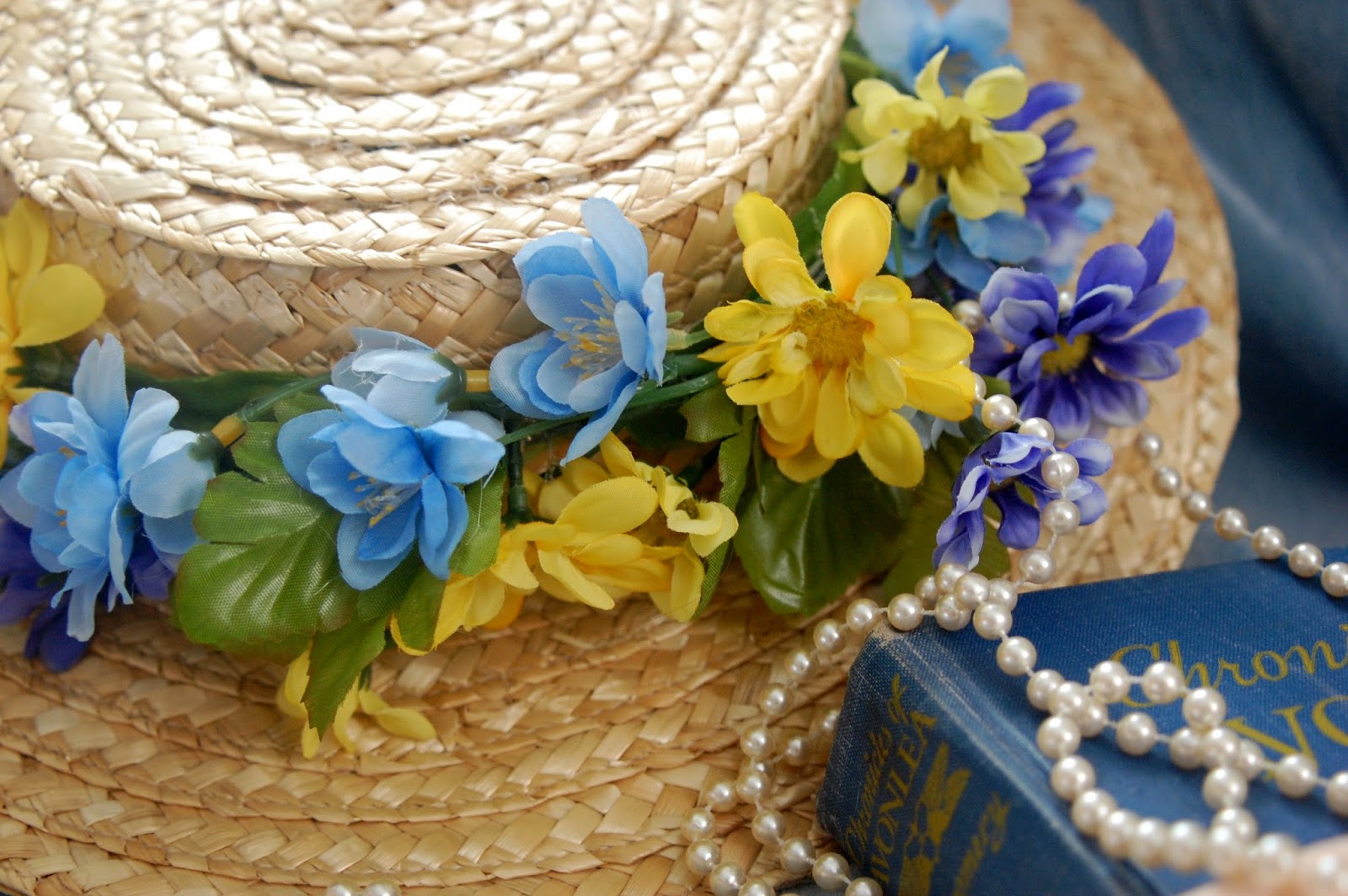 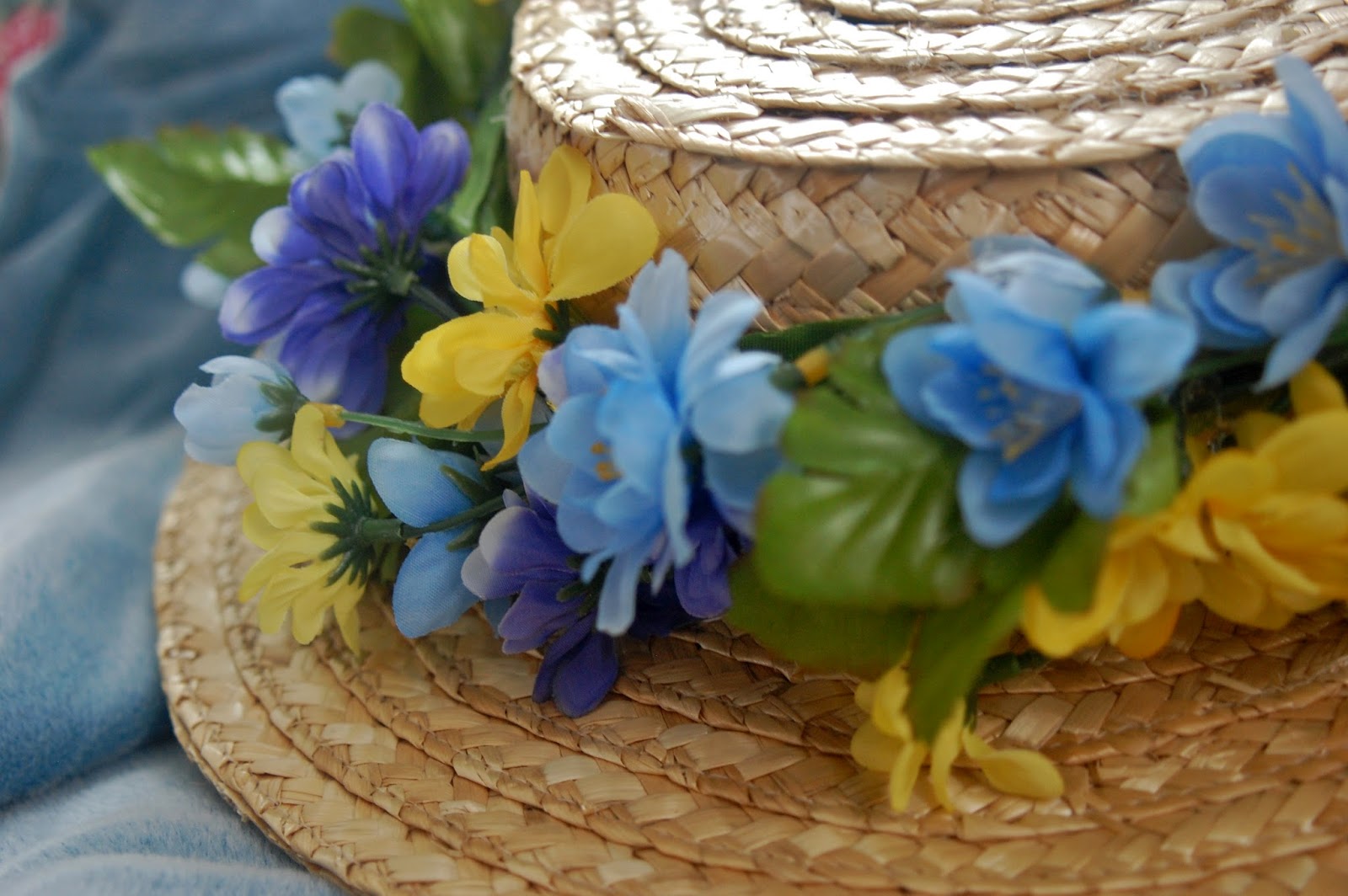 I hadn't finalized the rest of my outfit yet, but it would have looked something like this: 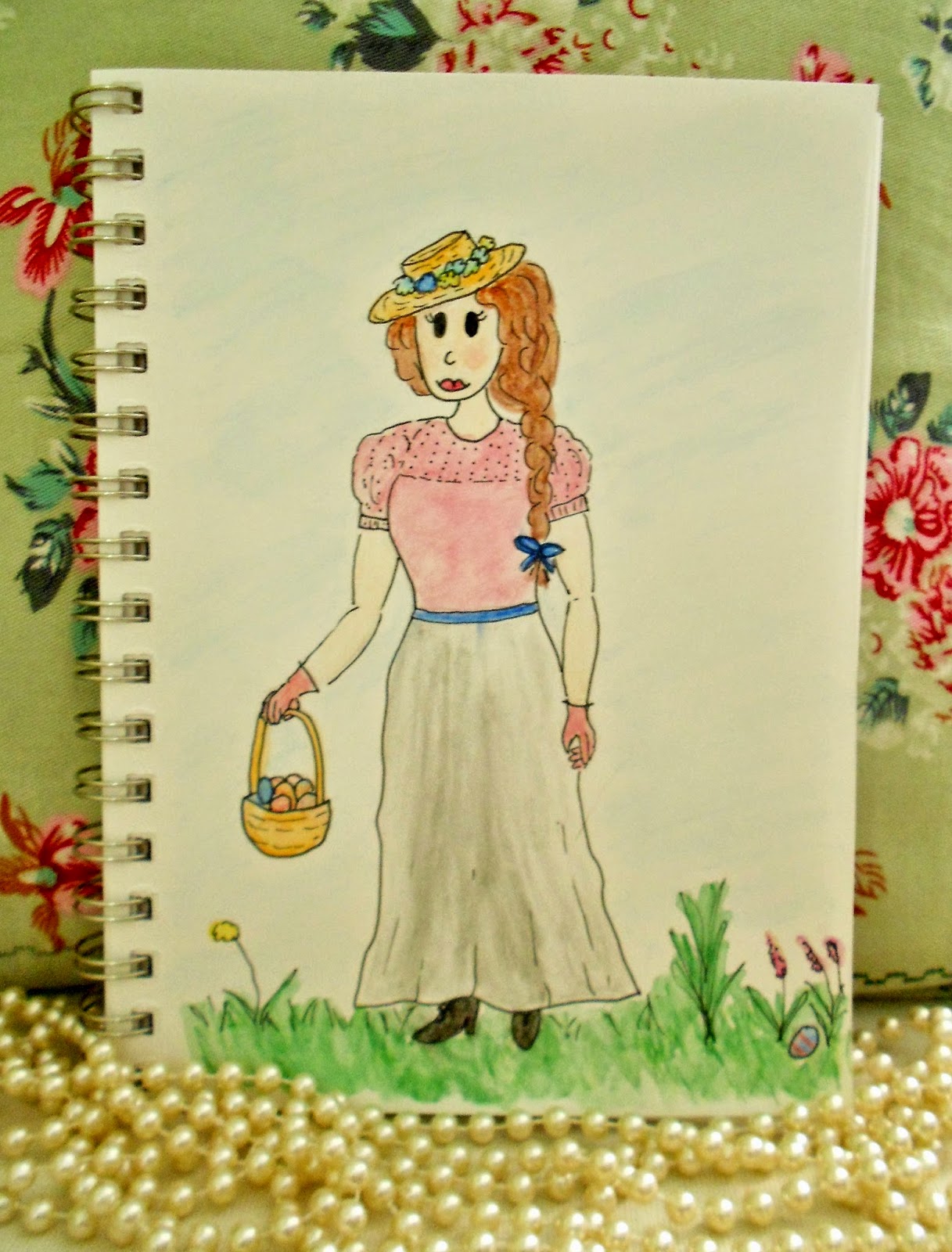 I hope everyone else is having a better day than I am.


At least I have a homemade rhubarb/apple upside-down cake to look forward to later. 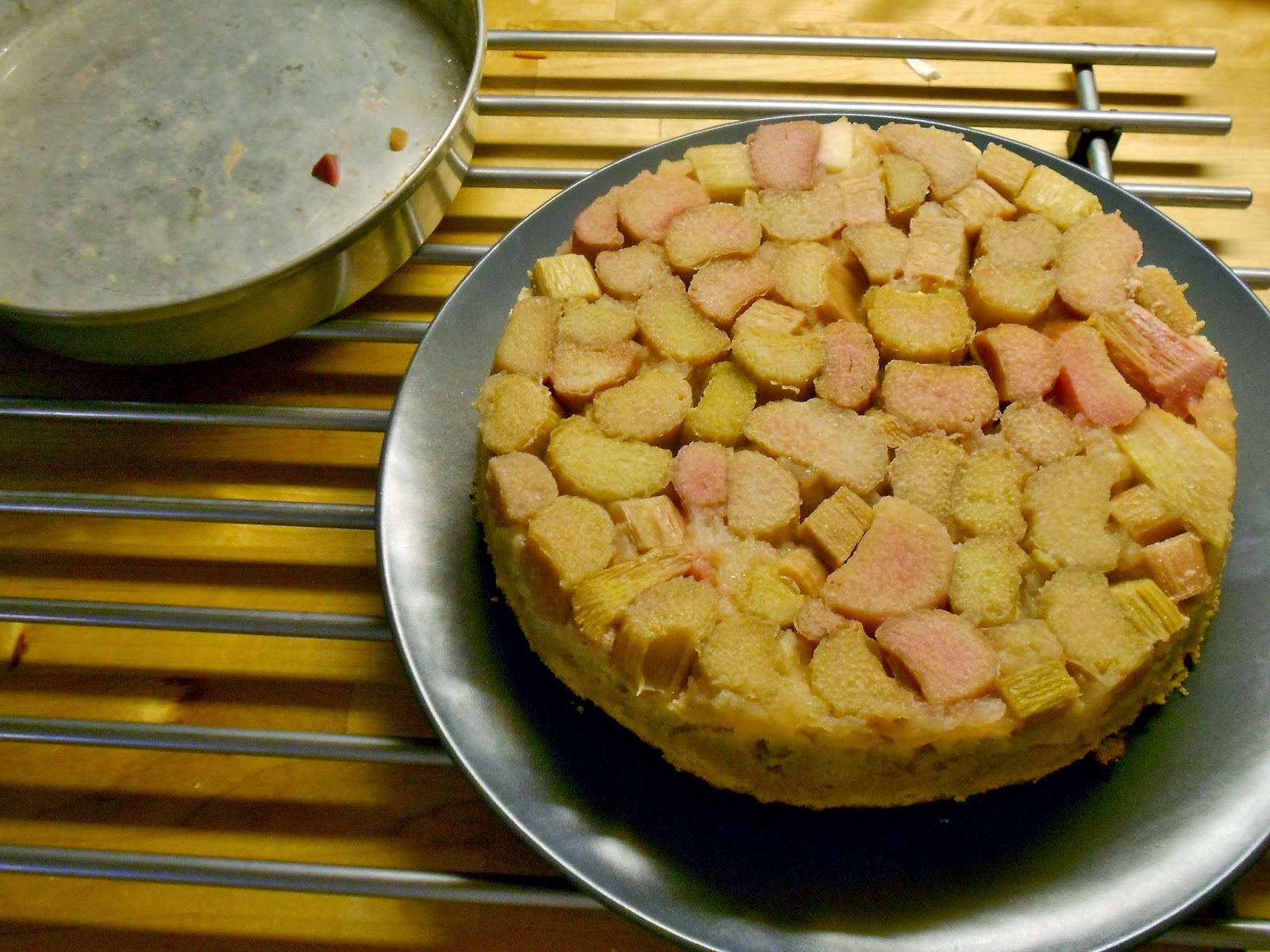 It's grain free and free of added sugar, so fingers-crossed it still tastes as good as it looks. 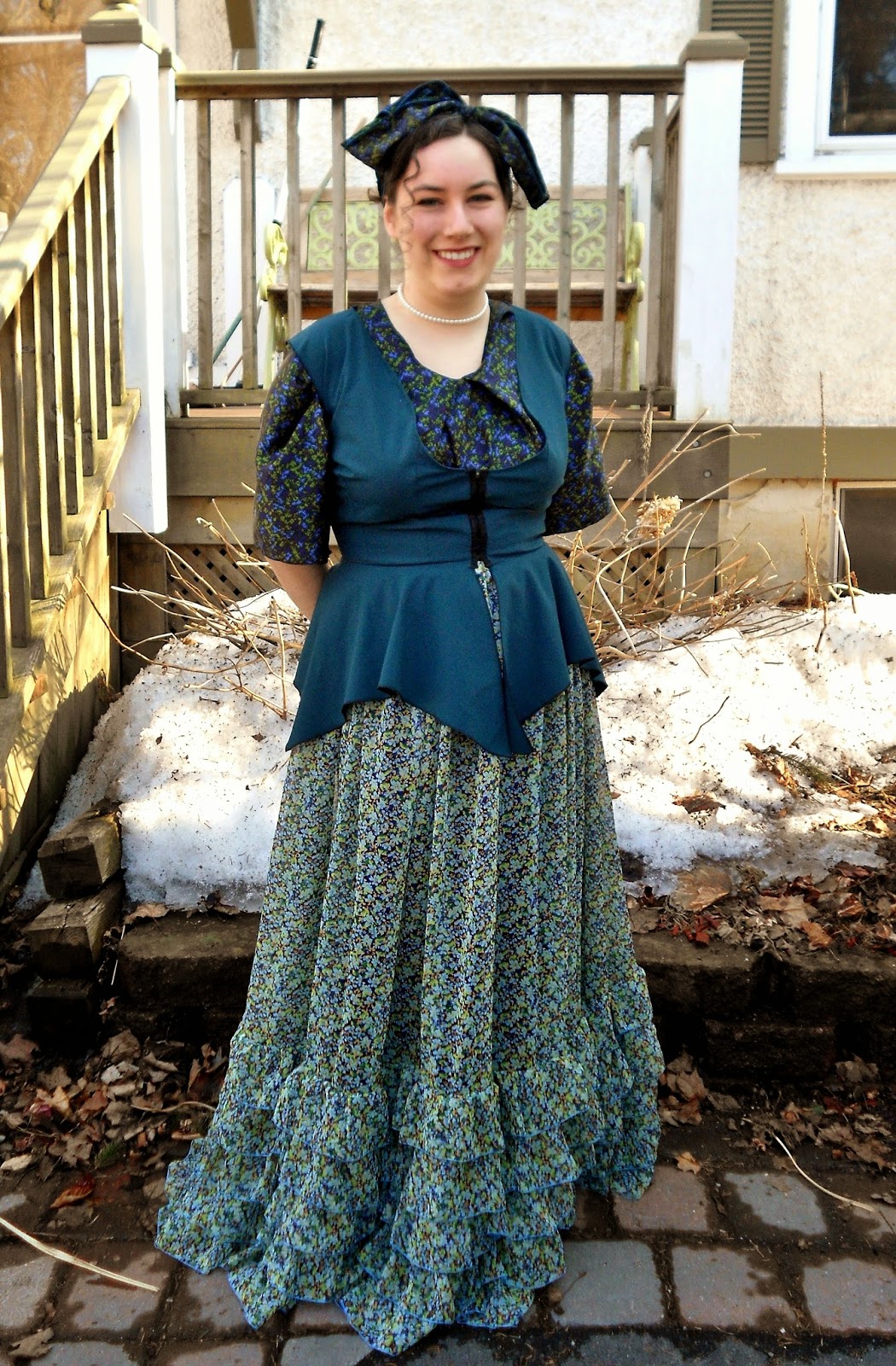 I went to see Cinderella last night (it was half-price movie night!) and had quite a good time. I don't often go to movies, but with Britt's extra discount we can now see movies for only $5.38 which is fairly cheap for a night out.

I was pleasantly surprised with how much I enjoyed Cinderella. Ok, about 98% of the time I was paying more attention to the costumes than the movie, but wow! The styling was excellent!! I loved how the costumes weren't specific to a particular period but seemed to borrow elements from 18th century, 19th century, 1930's, 1940's and 1950's styles. It was quite a mix but it worked amazingly well. I can't think of a single costume I didn't love. 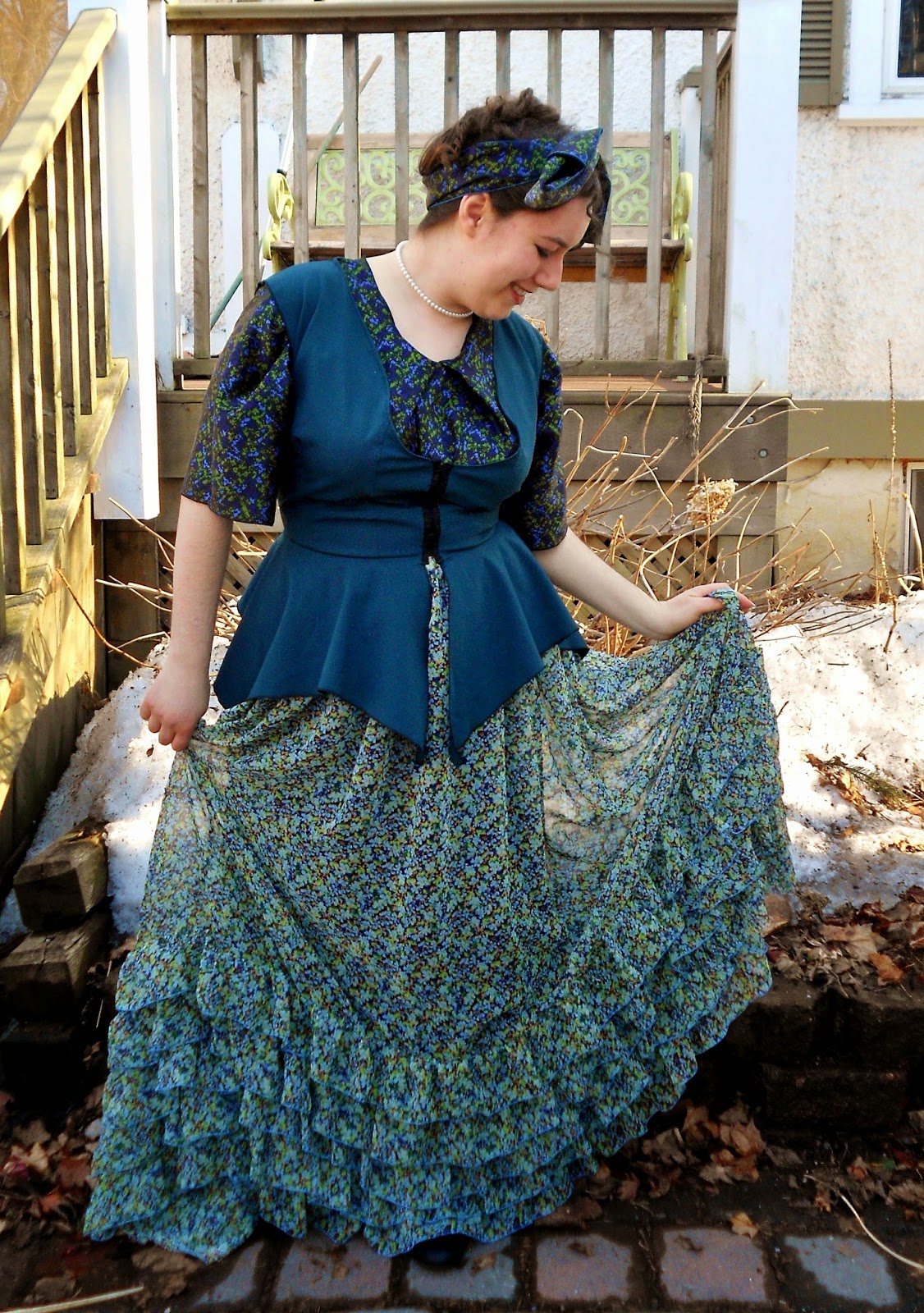 As always, I dressed up for the occasion. I was going to do a Cinderella themed outfit, but couldn't find a dress that worked. So instead I decided to go more "ugly stepsister", borrowing elements from the new movie and the old cartoon Disney version (specifically Drizella's costume).

My outfit is entirely me-made (yay!). The vest is a new piece made from a Victorian pattern. It was my first attempt at sewing something from my Victorian pattern drafting book. There was no instructions and I had to dramatically re-size the pattern. I'm not 100% happy with the result, but overall it came out alright. 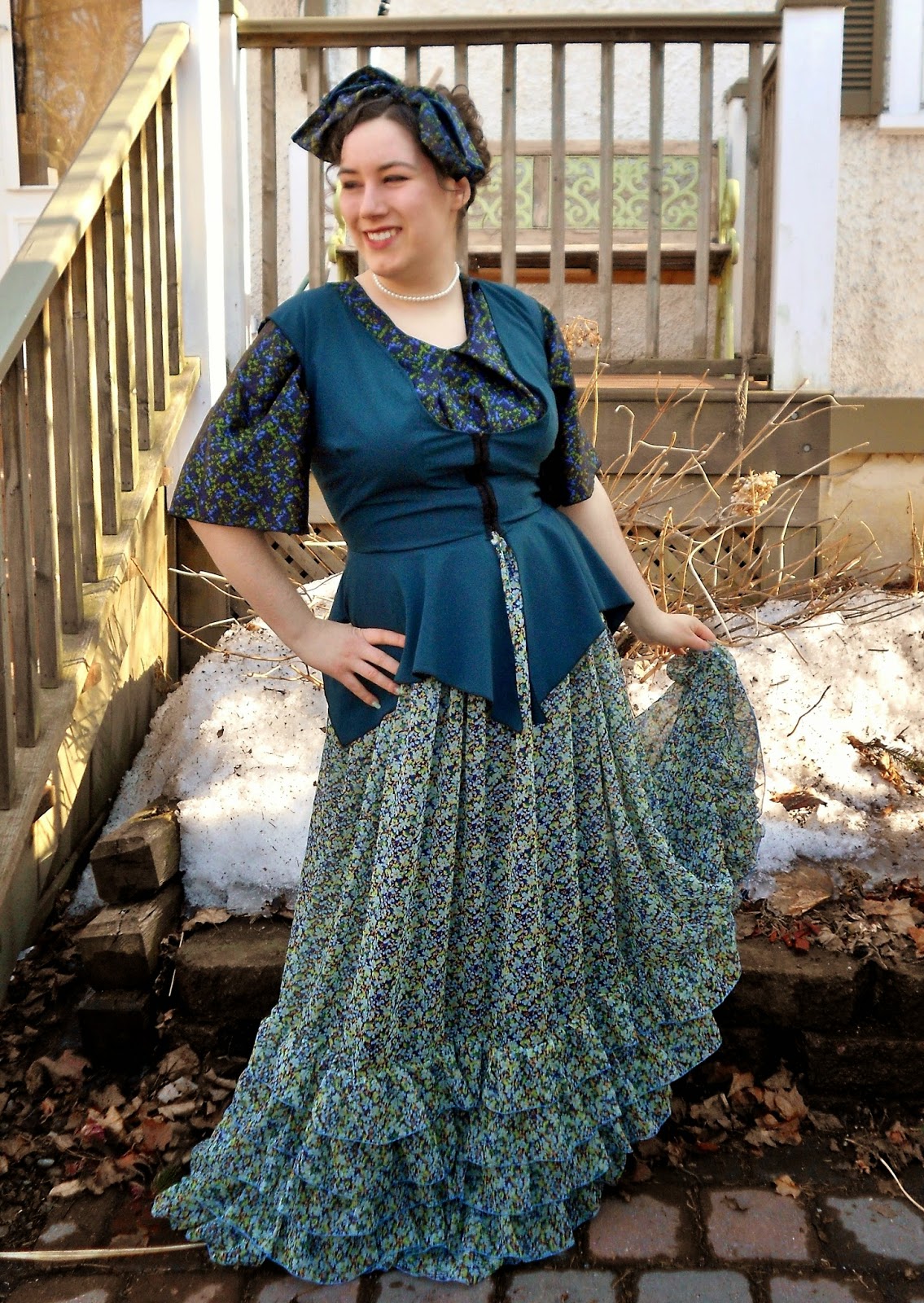 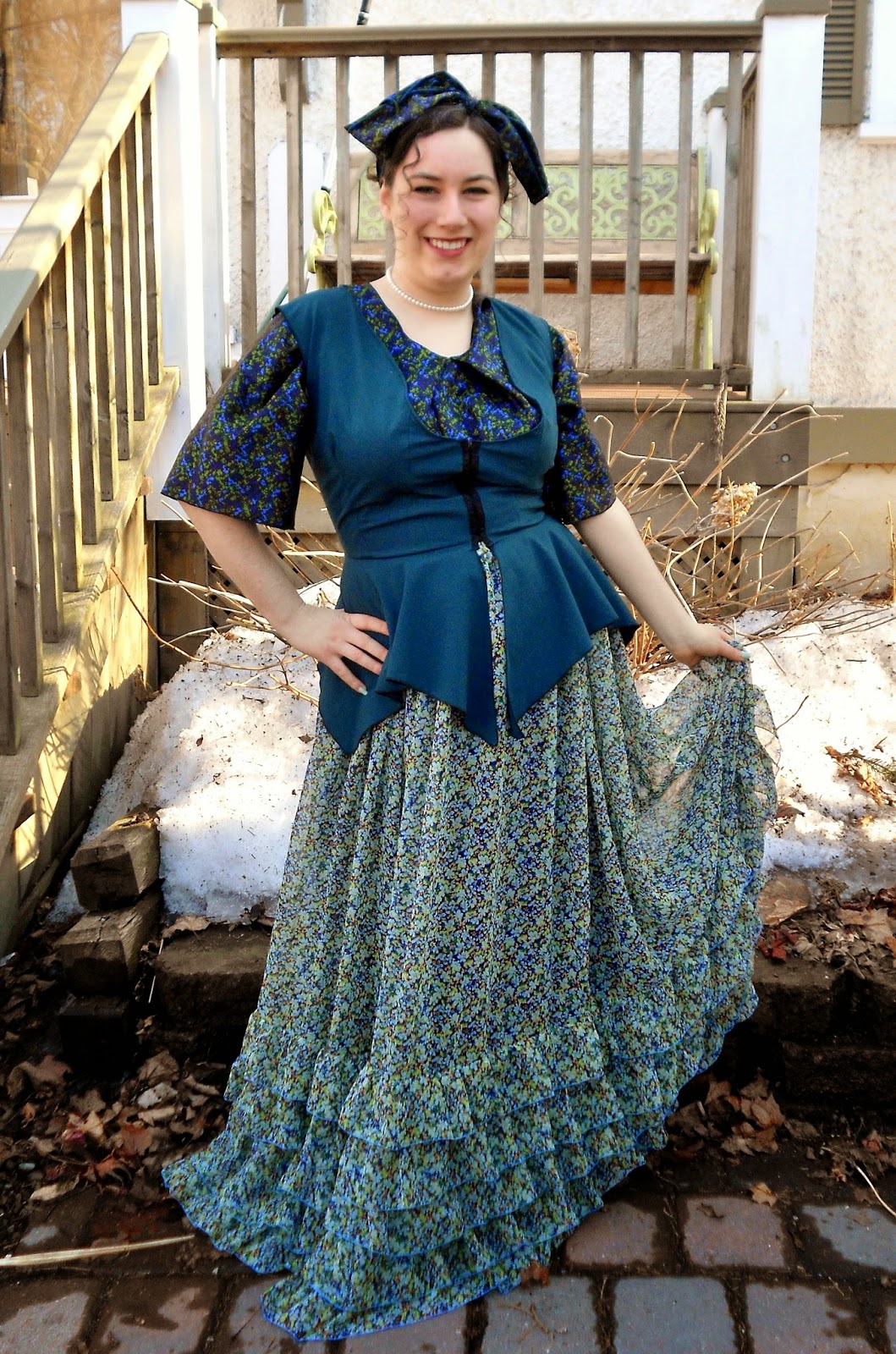 I hope everyone is having a good week so far!