Well, my birthday was a lot of fun. I had to work on the actual day but it was an easy day at work so it didn't seem so bad. I ended up listening to old radio shows most of the day since not many people came into the museum. It was Fab 50's in downtown Bowmanville and although there were a lot of great old cars I was a little disappointed. I was the only one dressed in a 1950's style!

I then rushed back home to have dinner (takeout from the Jasmine Garden in Whitby. They had really great vegetarian food), open presents from le parents, and get everything ready for my party. Whew! It was a lot of work! 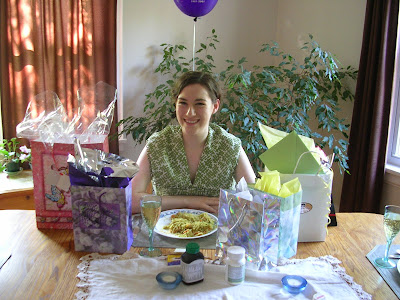 I didn't have time to take photos of the decor but here are a few snapshots of the evening. It was a 1920's themed party (since I just turned 20!). We got a little silly in the photos by the end.... 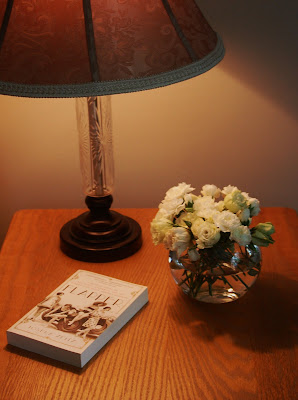 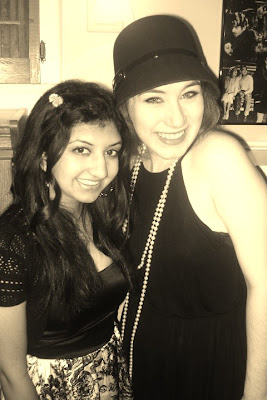 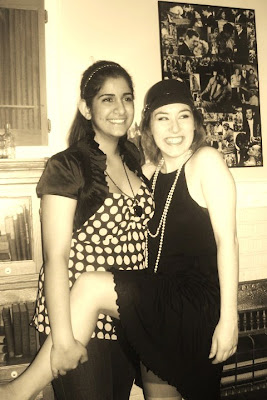 And no, I did not cut my hair. I just pinned it under the hat so it looked shorter :)
It was a really great evening. Thank you so much to every one who came.

And now for the presents! Everything I got was so beautiful! Here is a picture of most of my gifts (well everything I could find when I was taking the photo). I was given some lovely cards and gift cards too. 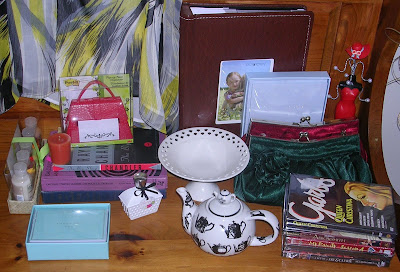 This is the magazine I mentioned a while back that my Grandma gave me for my birthday. It is from 1921 and I absolutely love it! 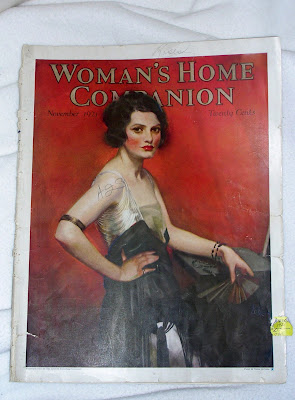 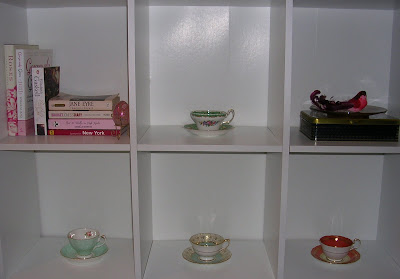 And you may notice something new on my shelf. That's right, my friend Carly gave me an absolutely stunning vintage teacup for my collection. I was looking at it later and noticed that it looked very similar on the outside to one of the ones my Grandma gave me. Upon closer inspection, I discovered it was made by the same company! Carly, I don't know how you got me such a perfect gift but thank you so much! 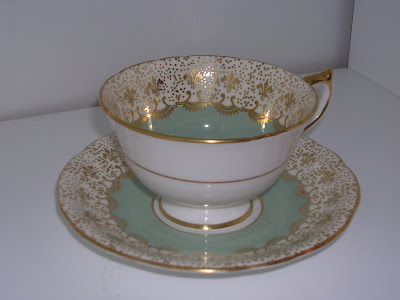 And the last of the gifts actually arrived in the mail a couple days late. I finally have Vintage Hairstyling by Lauren Rennells! I am already trying out some of the hairstyles and I must say it is a fantastic book. 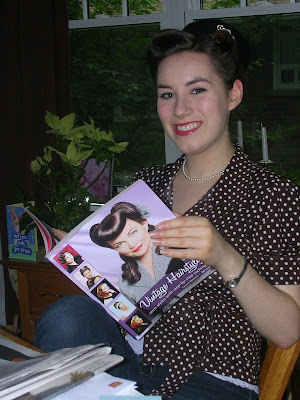 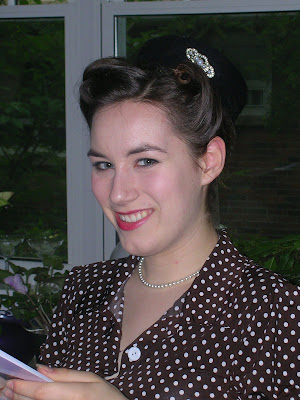 Happy Birthday to Me!!!

Happy Birthday to me!!! Today is my 20th Birthday and I am super excited for my birthday party tonight. Since I am turning 20 I decided to have a 1920's themed party. But for now I am stuck at work (quite bored since no one else is here and the museum is empty). Oh well. Just a few more hours then I can leave (4 hours 22 minutes....). Hope everyone has a wonderful day today :) If you are near Clarington, you should stop by for the Fab 50's festival downtown. There are so many pretty cars! 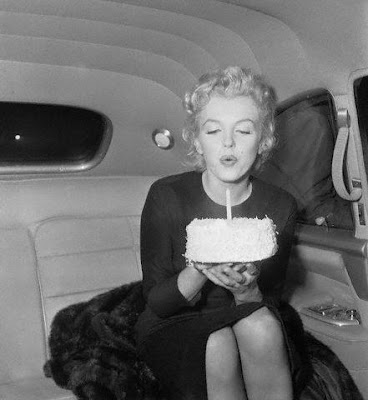 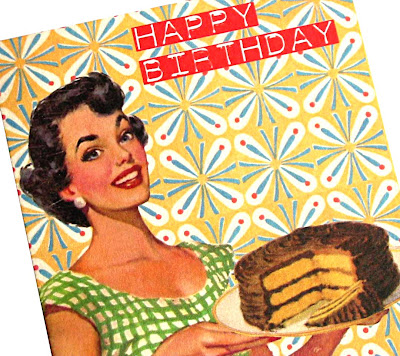 With the exception of a cold, I am feeling much more like myself this week. I do wish I didn't have to work on my birthday this Saturday, but at least I enjoy my job. Yesterday, we hosted a "pioneer day" for a group of home school kids. It was a lot of fun and, with the exception of one of the crafts (giving hammers and nails to 8 year-olds is a BAD idea), it went very well. I LOVE the pioneer outfit, and it is actually quite comfortable and practical. 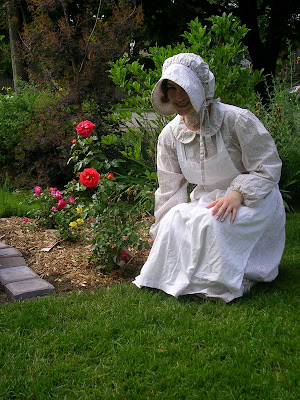 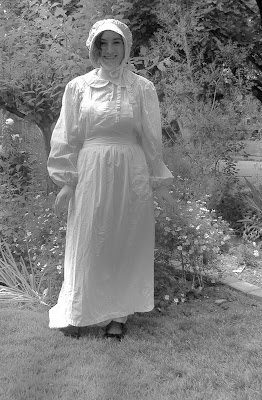 And as promised, here is a picture of the dress I bought at the Christie Antique show. I am trying to figure out when it was made. I think it looks 1940's or maybe earlier? It has unfinished seams (with exception of the arm seams which have obviously been recently repaired) and has a label that I think says Winnie Mae Frocks, but it is quite faded and hard to read. Any ideas of how old it is? 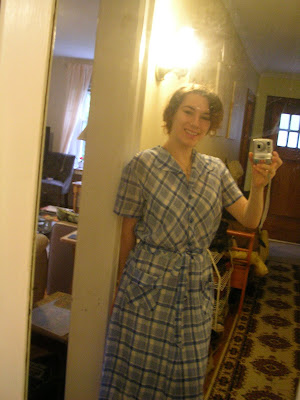 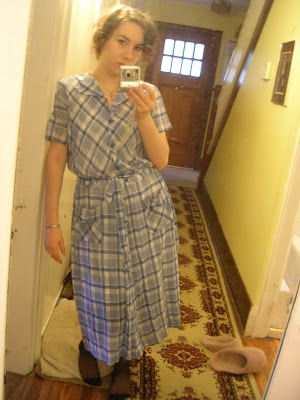 Its been a hell of a week. I have been working almost everyday, and on top of learning the ropes of my new job, I have been fighting with the university. They refuse to let me enrol in any classes next term (through no fault of my own). It's too long and complicated to explain here but basically they screwed up and now I have to suffer. It's a nightmare.

I keep meaning to write a blog post but I have been too stressed and busy. So here are a couple of clips from one of my favourite tv shows, Jeeves and Wooster. They always make me smile and hopefully if you are having a bad week they will make you smile to. Or even if you are having a good week... Smiling is always nice.

On Saturday I made the 2 and a half hour journey to the Christie Antiques Market (alone because everyone was either busy or didn't want to go). This was my first year going so I didn't quite know what to expect. I must say I was a little overwhelmed when I got there. I had planned on just wandering around aimlessly but that wasn't really an option when I discovered how large it was. I soon formed a plan and began walking up and down the main aisles, then moved to the aisles that ran perpendicular. I was there about 4 hours and I still don't think I saw everything but it was a lot of fun.
I didn't buy very much since I had to take everything back on the train with me. The only thing I regret not getting was a rusted 1920's dark green birdcage. It was $350, which ironically is the same price as the bird cage Holly Golightly gave the narrator of Breakfast at Tiffany's (which I finished reading on the train ride). Too bad it was so much money and there was no way to get it home with me (it had a full stand too). *Sigh* Oh well, there is always next year.
Here are some scans of what I bought (which the exception of a pretty blue plaid dress which I will post later). 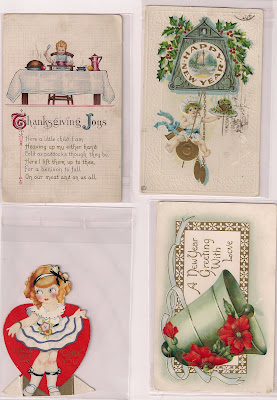 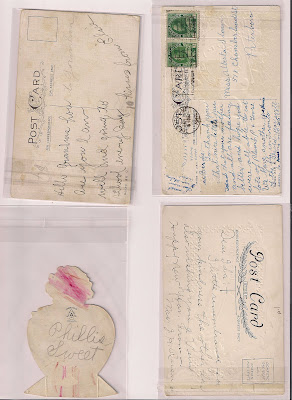 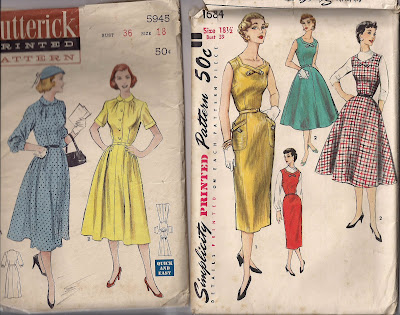 In other news, I discovered that one of the old antiques trunks my parents have is filled to the brim with old photos. Most are from the 1950's and 1960's but some appear even earlier than that. Here are two of my favourites so far (of my Grandma) but I expect to scan some more once I do some digging and get everything sorted. 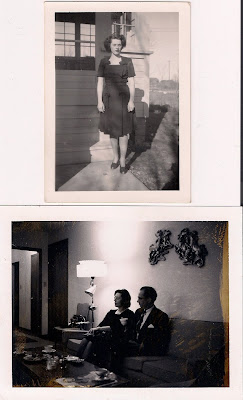 I am so envious of my Grandma dress in the first picture. The second picture just looks so cool, it almost has a film noir look to it. Sorry if they are a little hard to see but they were small photos to begin with.

I apologize it took me so long to post about the antique market but there's a good reason. I got a job! After much panic about not finding a job this summer, I managed to get a position at a local museum. I am now an "Archivist Assistant" :) Yay! Hopefully it will be a fun as it sounds. The other girls that work there seem quite nice. I will keep you guys posted :)