Happy Birthday to Me!

Ok, my birthday is technically tomorrow, but the celebrations have already started! Britt took me to Port Perry yesterday, where we spend the day going into cute shops, having coffee, and buying yarn. I love Port Perry. It's a great little town, with tons of small shops in historic buildings, and there is a lovely park/boardwalk along the waterfront. 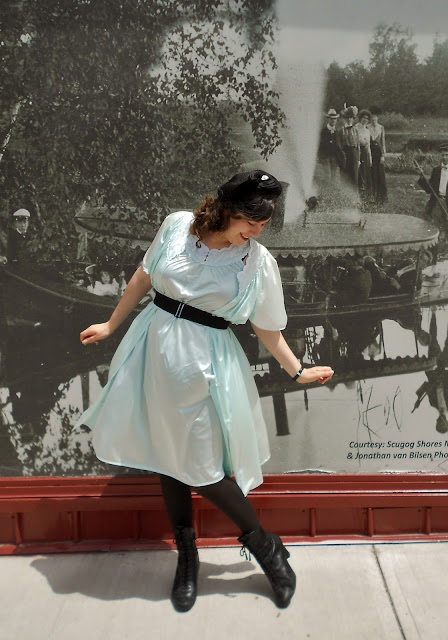 Britt was kind enough to snap a few shots of my outfit in front of the old mill (which has just been painted, and they have added old photos along the side). I wore my "new" vintage nightgown set. These sort of pieces can often be found for much less than the cost of a vintage dress, but can be styled to look dress-like. I am loving the soft mint green shade of the material. Mint has to be my favorite colour at the moment! I paired the "dress" with a homemade belt, vintage hat, and Victorian-style boots. 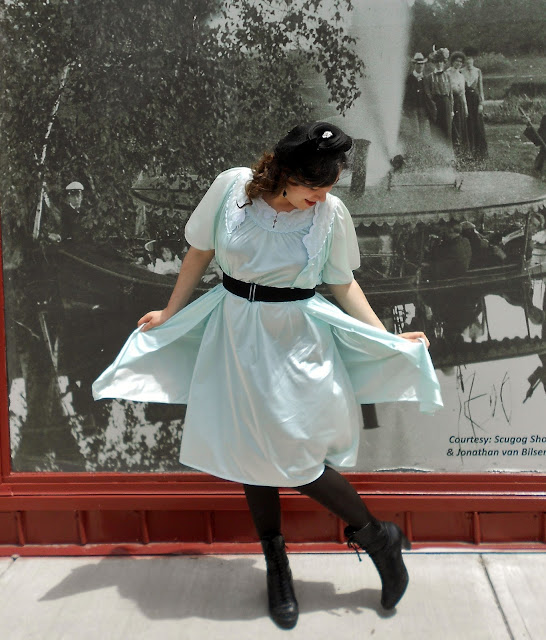 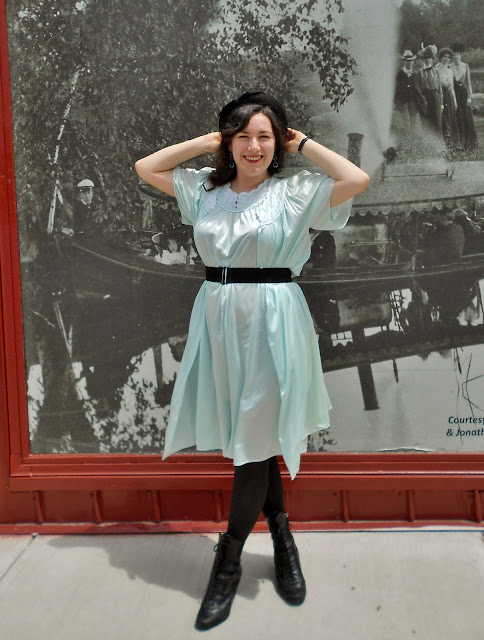 On the health front, I am finally starting to feel better. I am hopeful that I finally figured out the cause of my health issues of late. I had a bunch of tests done, which all came back normal, so the doctor basically said it was all in my head and gave me some antidepressants. Oh boy, was I angry after that! Antidepressants are fine for someone who is actually suffering from depression, but I don't have any of the symptoms of depressions other than fatigue (which really is a symptom for just about everything). So I read through the entire Canadian Medical Association Home Encyclopedia and discovered my symptoms match very closely to those caused by low blood pressure. I've always had quite low blood pressure but it's never been a problem before (I did have it checked out by a doctor a few years ago and I was told it was perfectly normal). However, I've eliminated most processed food from my diet and thus likely lowered my sodium levels as well, which I suspect caused my blood pressure to drop even lower. I've measured it a few times over the past few weeks and it was often in the 82/50 range. Yikes! So I've been increasing my salt and fluid intake which seems to be helping. I'm finally feeling like myself again after 2 months of awfulness *does a happy dance*. I'm going to keep monitoring it for a week or so, perform a statistically analysis on the data, and then return to the doctor with my findings. (I'm finally putting my statistics major to good use!)

Anyways, if things continue how the are, I should be able to get back to work on Phonograph Fashions. I've just started watching House of Eliott (thanks again Elizbeth for sending it to me!!!) and it's given me so many design ideas I want to try out. Now that I'm feeling better, I should have a lot more time and energy to dedicate to sewing. August will be my shop's 2 year anniversary, so I'm planning some sort of giveaway to celebrate!

I hope everyone is having a great week!

Well, I've been continuing work on the Victorian fainting sofa. I originally had thought this stage of the process would involve some meditative pulling of staples. Something like this: 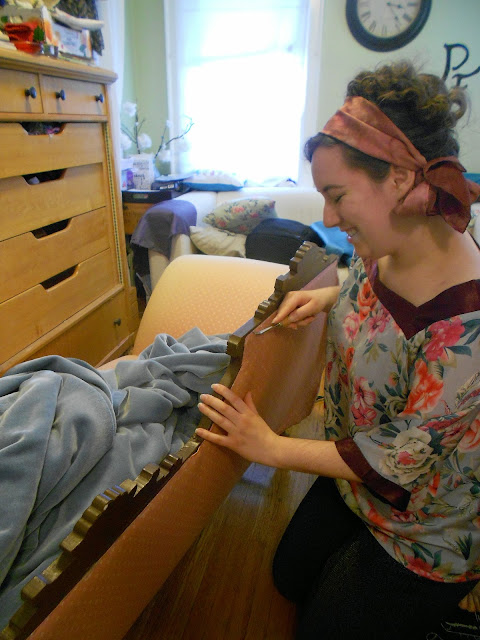 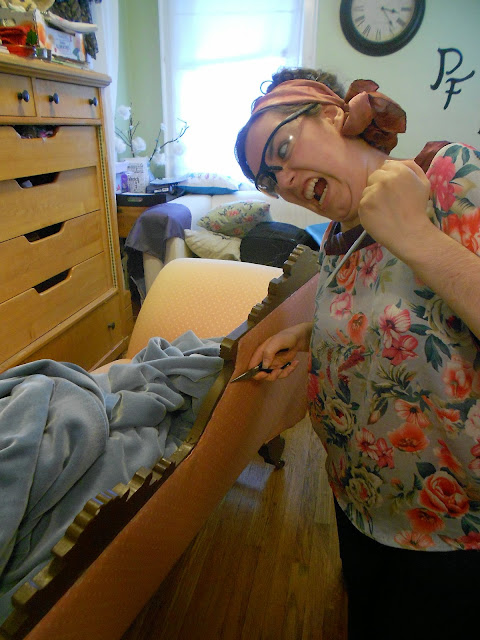 Yeah....Stripping off the old material proved to be much more challenging than I initially thought. Whoever did it last used a really, really good staple gun. Those suckers are really stuck in there! They are actually below the surface of the wood, which makes the staple removing tool I bought pretty much useless. I ended up just ripping the fabric up to help loosen the staples, which could then be removed by a pair of pliers (I found needle nose pliers to be more effective than flat-nosed).

After removing the back and bottom fabric, I realized there was no way to get the front fabric unattached without physically removing the back of the chaise. That was a lot more work than I expected! I didn't want to risk stripping the screw heads, so I ended up dismantling with a regular screwdriver (rather than an electric one). Once again, whoever put those screws in did a very, very good job. My hands still hurt! 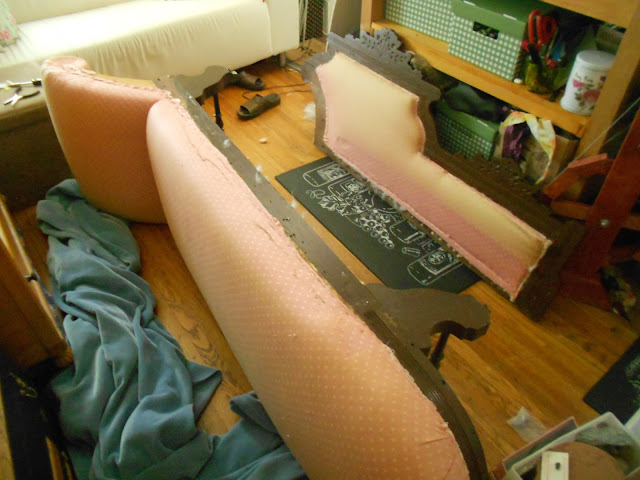 Now that the fabric is off, the wood appears to be pine and has had some repairs done over the years. You can see at one point the back snapped and had to be braced: 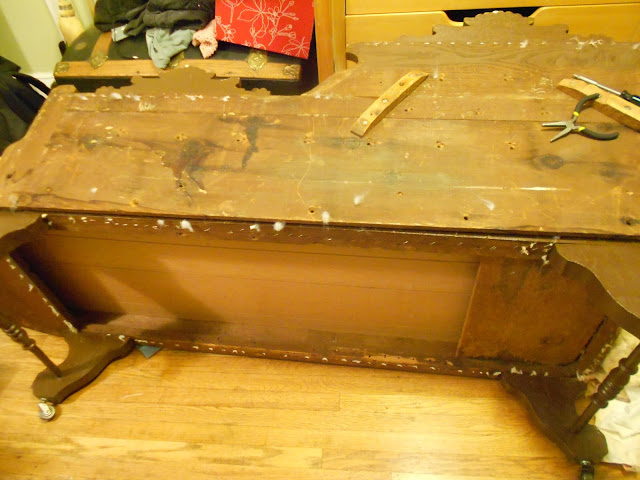 I found some small specks leftover from a previous paint job. It appears the chaise was at one time an antique green colour. I'm starting to suspect it may have always been painted, and the last owners painted it brown to make it more "wood-like" in appearance. Based on this new information, I've decided to just repaint it, rather than trying to strip and stain it.

There are also holes along the back that make me suspect that the back was originally tufted. I may in the future re-tuft it, but since the current foam is still in good condition, I'm going to leave it as-is for now.

I am enjoying this project immensely! I didn't think it would be so much fun. The fact it is a lower quality piece makes it a more relaxed process, and because it has already been altered means I don't need to worry about protecting the original finishes. I've already bought the fabric to re-do it, although I may not have quite enough. I under-estimated the fabric a bit to try and save on costs. The sections are small enough that if I run out, I can just buy bit more to do the remaining sections without having a lot of fabric wasted.

Now that I am ready to take it outside to sand it (before painting), the rain has been pouring down. Between the weather and my sores hands, the refinishing is taking longer than expected to complete. It's my birthday in a week, so I'm hoping to get it done before then but it will depend a lot on the weather.