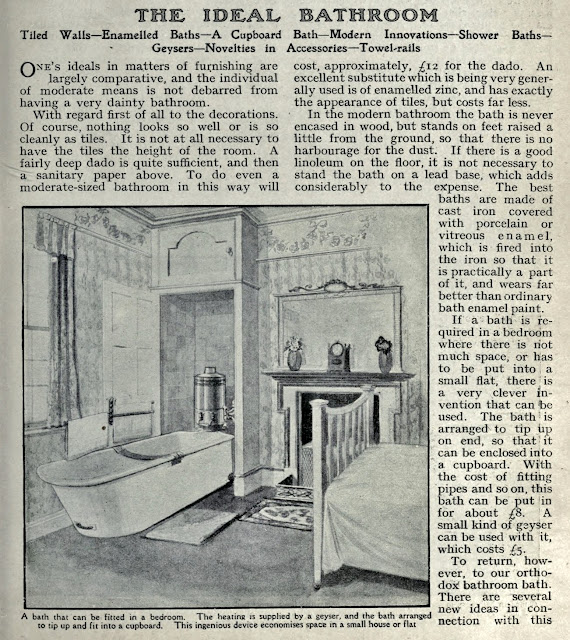 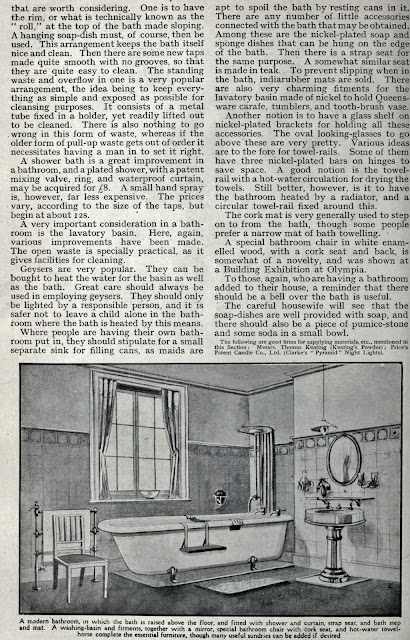 Isn't the fold-away bathtub the neatest thing ever?! Seems like an idea that would be great in a tiny house.

Just what I needed...another project! Despite still feeling rather poorly, I decided to buy a Victorian fainting sofa to restore. Isn't she a beauty? 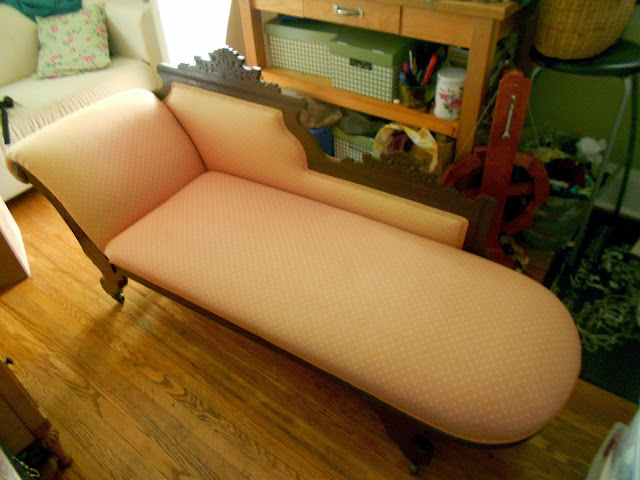 My previous seating arrangement in my sewing studio was a small, cheap sofa from Ikea. It actually lasted around 10 years, despite it's rough treatment and lower quality build. Now that I'm no longer a teenager, I thought it was time for a piece that will last. I decided on an antique piece for several reasons:
1) I love old stuff.
2) Victorian's had wicked style
and 3) An antique piece will hold most of it's value if well treated. Unlike buying something from a big box store, if I get tired of it or it no longer works for my lifestyle, I can just resell it. 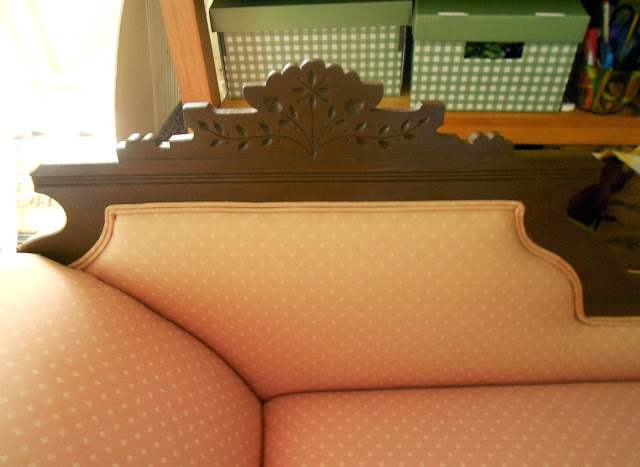 I looked at a couple Victorian sofas, but they were all just slightly too big for the space. The fainting couch is actually slightly smaller than what is there now, which has the added benefit of giving me a bit more room to move around in my rather tightly compacted studio space. 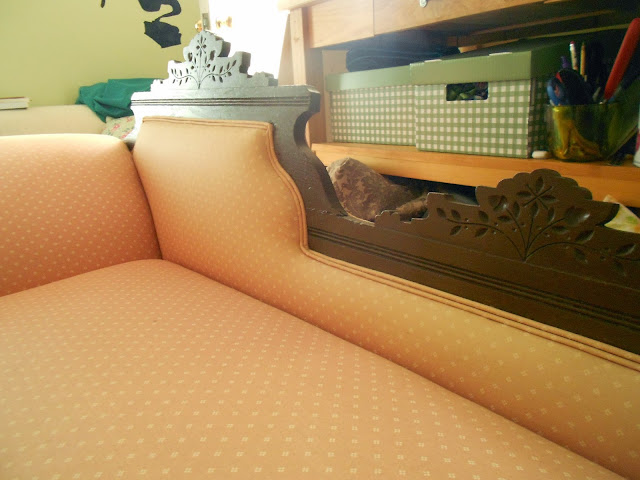 I haven't quite decided what to do to her. The current fabric is clean, but very faded (the piece was apparently kept under a bay window by it's previous owners). I've pretty much made up my mind to reupholster her in some sort of blue/teal/turquoise fabric. The part I'm stuck on is what to do with the wood. I realize it probably just looks like stained wood in the photos, but it is in fact painted brown. Who paints wood brown?! It's already brown! It really boggles the mind, and ruins the look of the lovely carving on the back. I'm torn between attempting to strip and then refinish the wood, or just painting over the current paint (maybe light grey to highlight the detailing). I'm a little worried the brown paint could be covering up some sort of damage or patch job. Any suggestions? I have to make up my mind before doing the reupholstery but I'm quite torn. 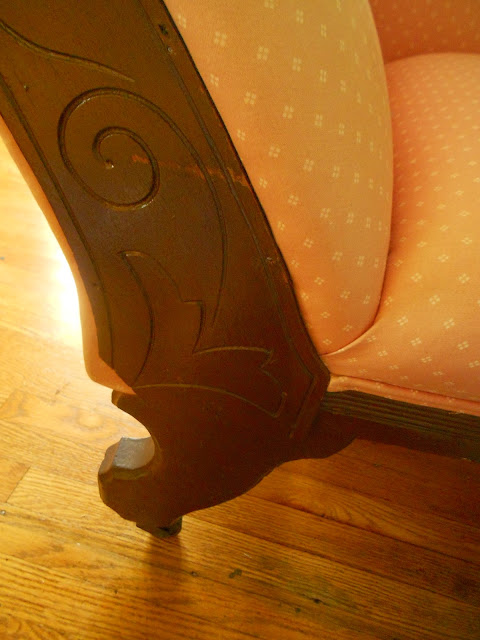 I'm fixing her myself, so I will try to post process pictures as I go along. I'm fairly competent with anything fabric related, so I'm pretty confident in my abilities to not screw this up. If I do managed to mess up, I will take it to a professional, but I'm pretty sure it will be ok...

I'm hoping that I can end up with a one-of-a-kind Victorian piece for less than the price of buying a new sofa at Ikea. To replace my current Ikea sofa with a new one would be about $340 with tax, so I'm using that as my budget for the piece. The sofa itself was $170 (including tax), which leaves me another $170 for the restoration. Wish me luck!

You may notice along my left-side of my blog there is a new Etsy mini below the one for Phonograph Fashions. That is because I've opened a second shop! At the moment is it stocked with printable card designs, but I have plans to add a broader range of items. You can find my new shop here.


The note cards all have some sort of vintage-theme, and often feature animals dressed in vintage outfits. For the introductory price of only $2.50 CAD you get two printable card designs, which can be printed on regular letter-sized card stock. The prices will be going up in a bit, so take advantage now!

Here are a couple of the designs: 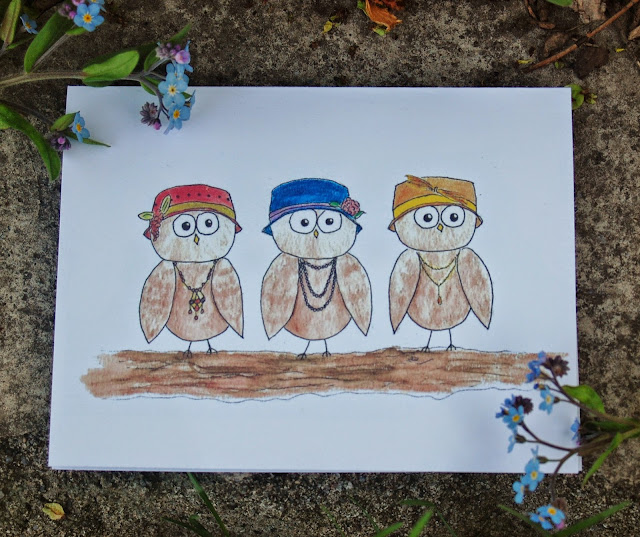 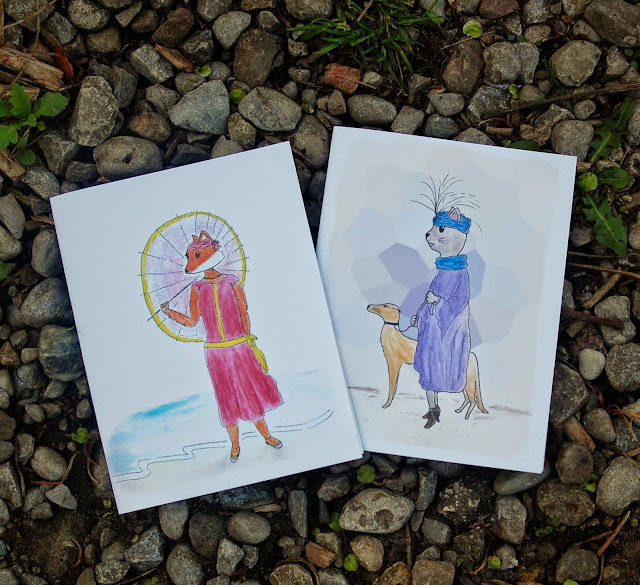 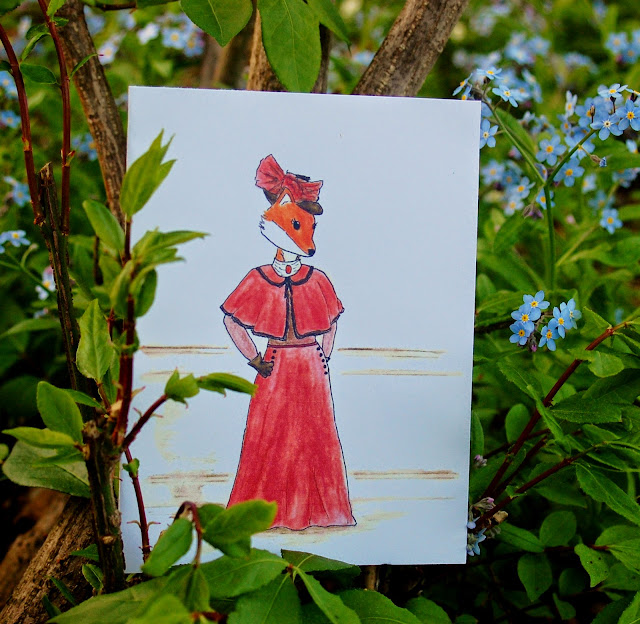 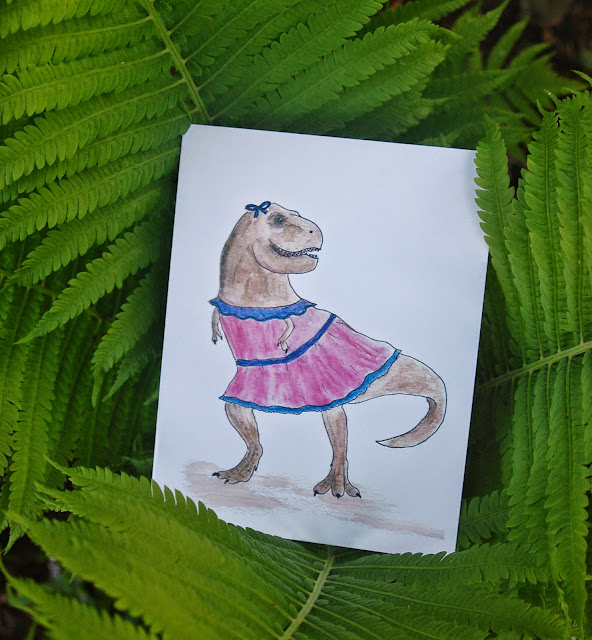 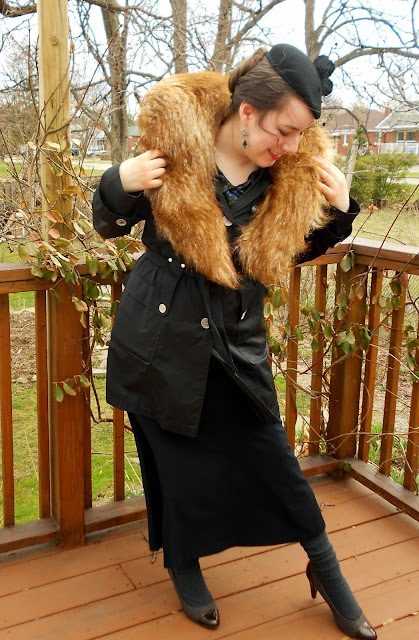 On windy day a couple weeks ago, I had the overwhelming urge to sew myself something. I haven't made anything for my own wardrobe in quite a while, and it was lovely to sew something without worrying as much about the final product. I decided to make myself a detachable fur collar from some scrap faux fur my friend gave to me.

I based the collar off this image from the 1930s, as well as this one.  The faux fur I used is a different colour, but I kept the design very close to the original. It's a little silly and very dramatic. 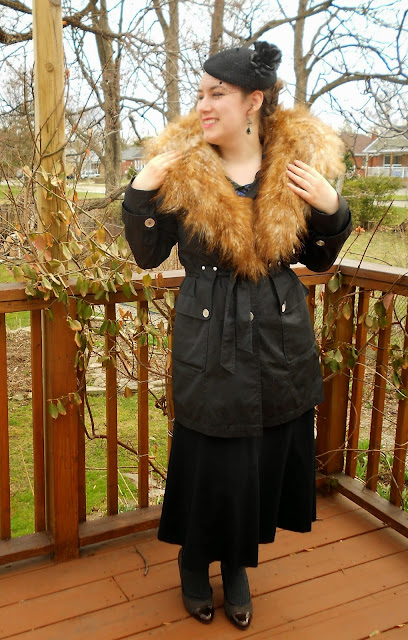 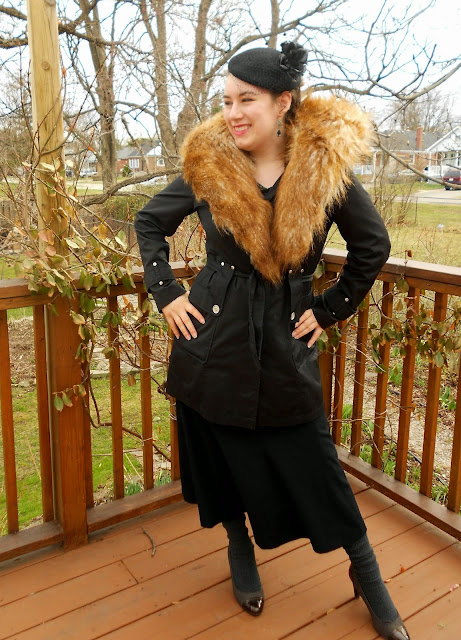 Apologizes if there is a bit of radio silence from my end over the next few weeks (and past week as well). I've been having a few health problems, which my doctor assures me is just stress (which is kind of ironic as my major stress lately has been how poorly I've been feeling). It's bad enough that I honestly thought I had a kidney infection or something quite serious until all my test results came back negative. So I am making a big effort to chill out. I do loving blogging so I plan on continuing, however it may be a little sporadic for a bit. Hopefully I can get back to normal soon. I think more yoga is in order!

I would love to know how other people destress. I used to knit as my major stress reliever, but with my wrists that's no longer an option. Any suggestions?