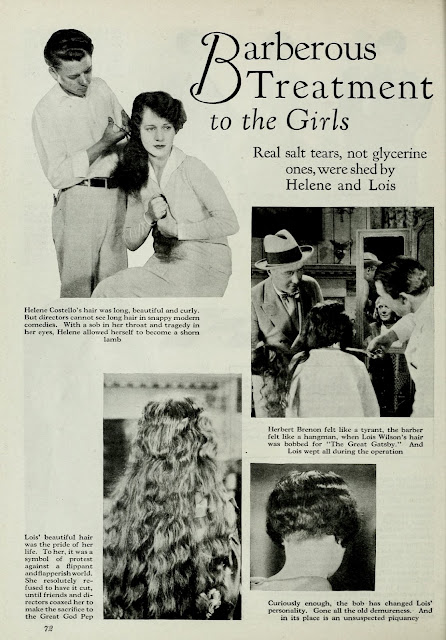 Oh those poor women! I would cry like a baby if all my hair was cut off. Speaking of which, I made a new youtube video: 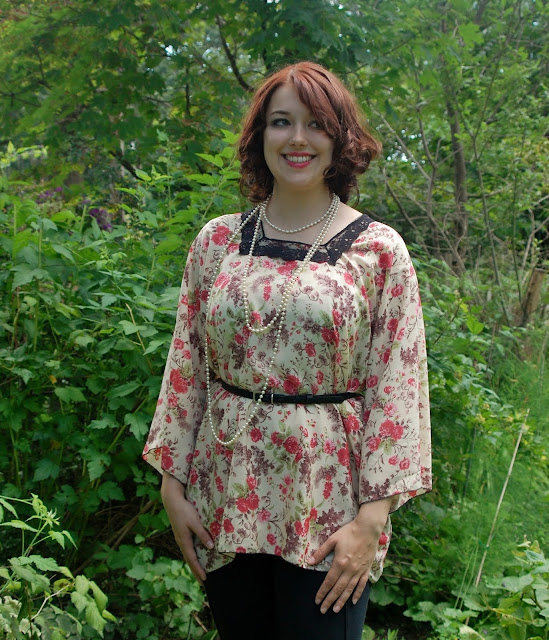 You may have noticed the new Etsy bar on the side of my blog --->
That is because my shop is now open! Phonograph Fashions is my clothing line of early 19th century inspired clothing. I have a lot of 1920s (especially early 1920s) blouses stocked at the moment as well as some Victorian bloomers. More items will be listed in a couple weeks, but I do also do custom orders if you want something with a specific fabric or in a specific size.

I have created a coupon code for blog readers to save 10% off everything until September 1st. Rather uncreatively, the code is BLOGREADER. Most of my items are one of a kind so if you see something you like, get it while it is still available! 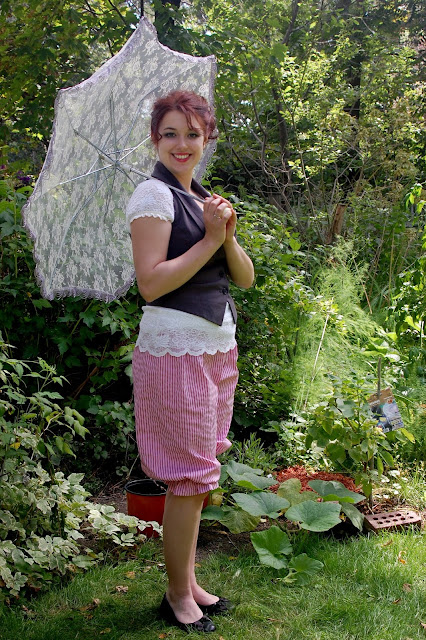 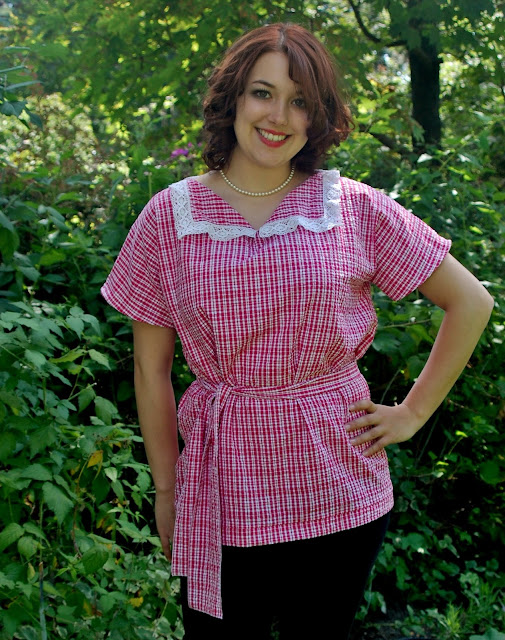 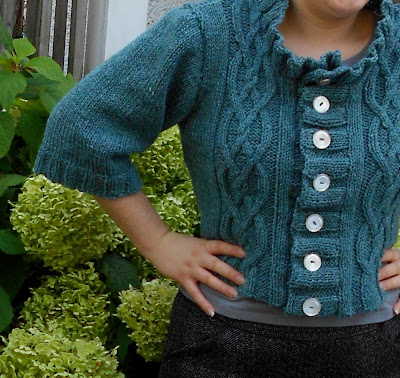 I have been knitting up a storm lately. I realized I had about 9 knitting projects on the go so I have been striving to finish at least some of them. The first project to cross off my list was this charming cabled sweater. It doesn't really look anything like the pattern, which was accidental rather than planned, but I am very happy with the result. I am dying for colder weather so I can wear this baby out. It's 100% wool with 6 vintage buttons (and one new metal button). 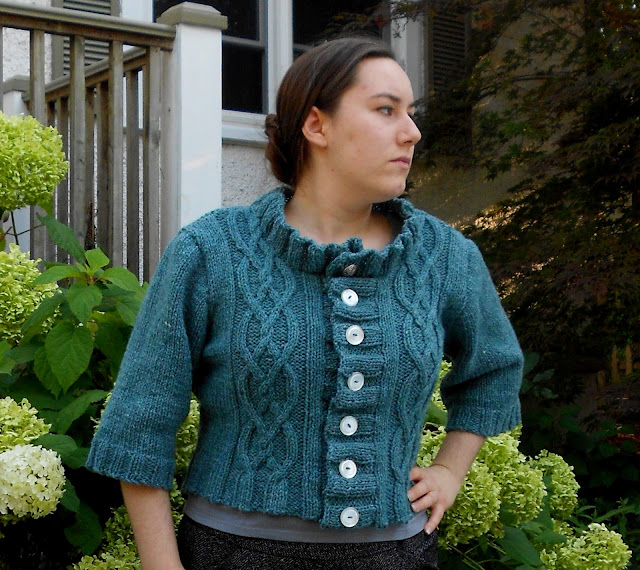 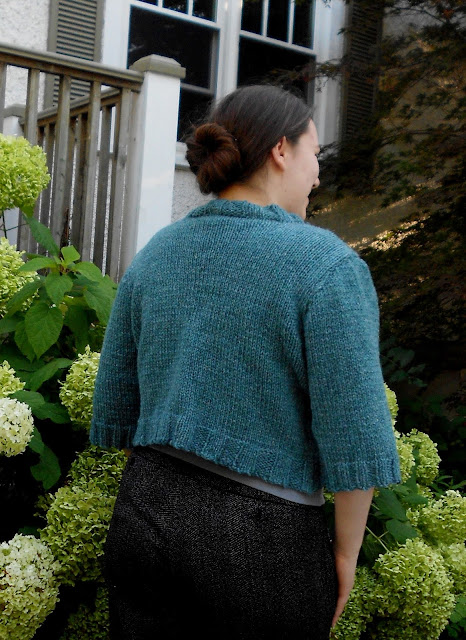 This next sweater I actually finished ages ago but never got around to photographing. It's from a free 1950's "evening sweater" pattern. It was suppose to have an off-the-shoulder knitted piece but after trying it I decided to remove it and add a piece of taffeta ribbon. I have yet to find an excuse to wear this top. Maybe a Christmas party later this year? 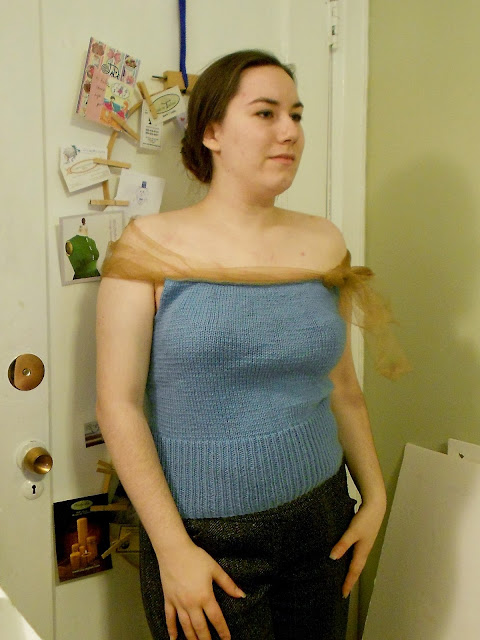 And finally a knitting flop. I designed this 1920's style dress a couple years ago but it took me ages to actually get it sewn up. It was originally going to have ruffles but I never finished them. I'll admit it looks cute on the hanger but it looks extremely terrible on. I may wear it was a warm slip in the winter, or just frog the entire thing and resuse the yarn. 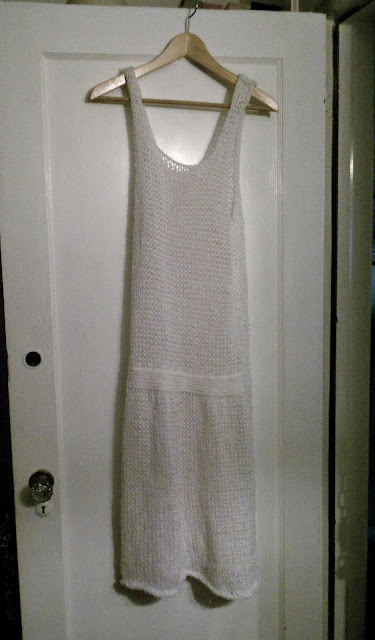 I still have quite a few projects in the works. I'm most excited about a 1930's sweater. I'm altering the original pattern quite a bit but it will hopefully look amazing when finished. It might take quite a while though. It's going to look roughly like this: 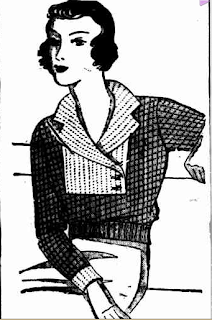 PS: If anyone else is on Ravelry you can find me here. Please feel free to add me as a friend. I love looking at what other people have knitted and discovering new patterns through friend's favourites list.
Posted by Kate at 2:54 PM 4 comments: 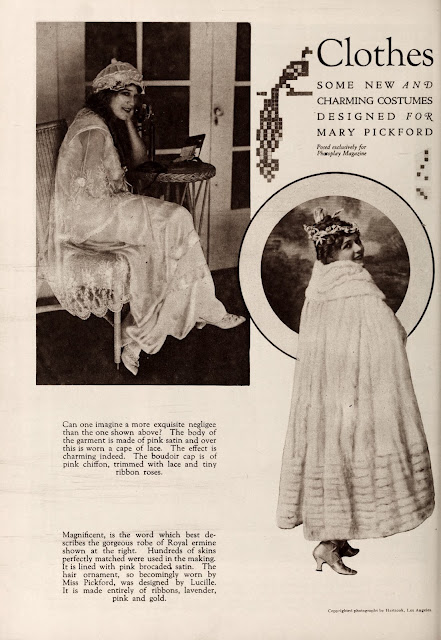 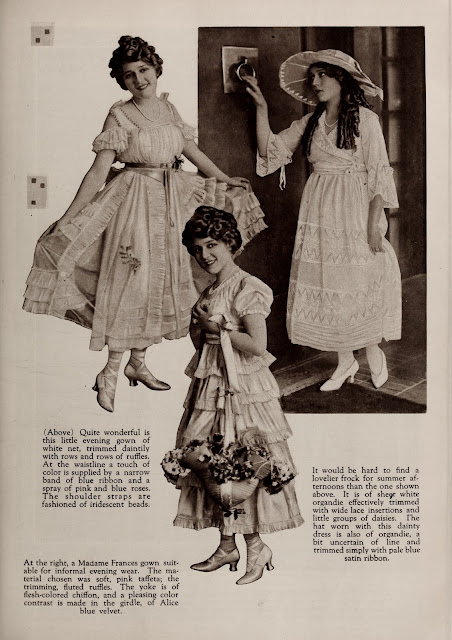 (Open image in a new tab to view larger)

I've been lacking in dressing inspiration lately. I've been spending a lot of time sewing for my new Etsy shop (which will be open in a week or two!), but haven't been getting dressed up myself. Pajamas have been my uniform the last few weeks (they are 1920's inspired pajamas, but not very glamorous ones). However, today I tried to make a bit of an effort, and threw together this outfit. The top is 1920's inspired (a bit too large for me though), the skirt was 50's inspired, and I did my hair in an loose Edwardian style. It was just what I needed to break out of my rut. It's good to get dressed up every once and a while. 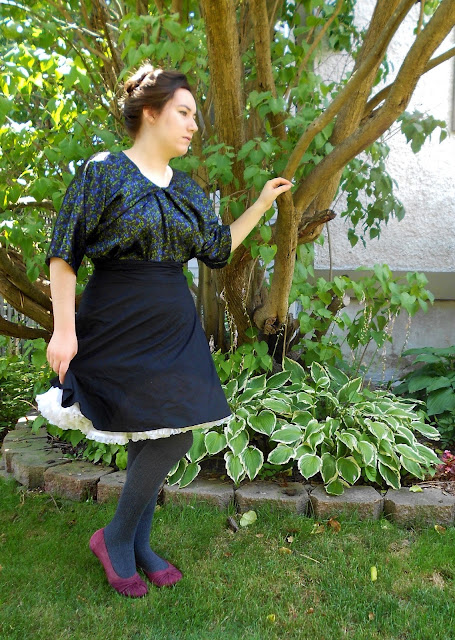 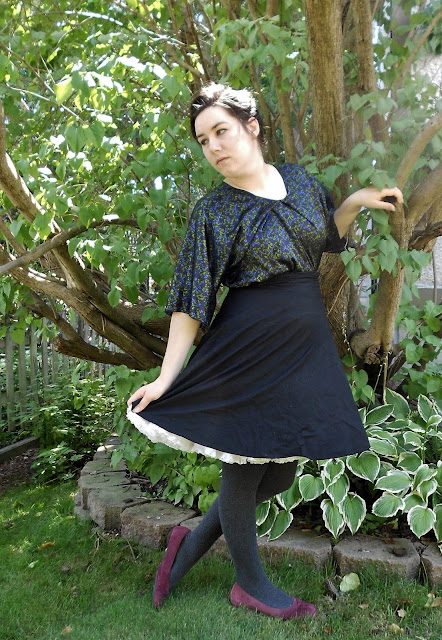 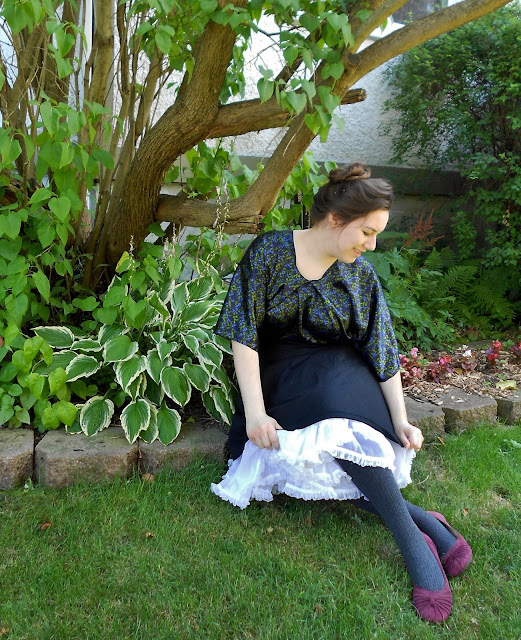 This afternoon, I attended Brits on the Lake, which is a annual British car show held in Port Perry. We arrived later in the day but it was still packed with people. I tried to get some shots of the cars but I couldn't even get close to many of them. Here is a few I did manage to snap (I tried to edit out the people): 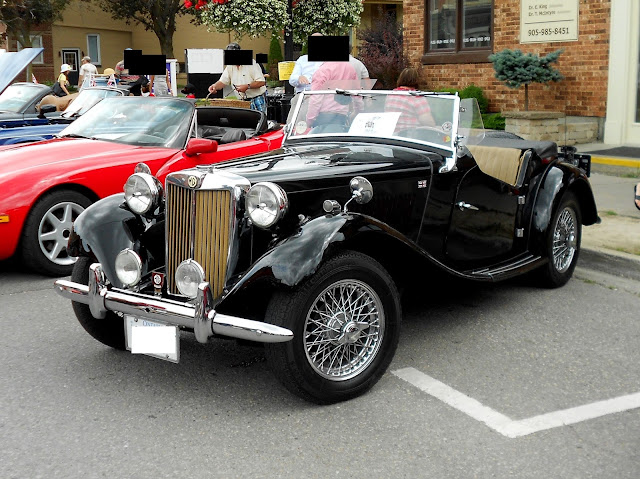 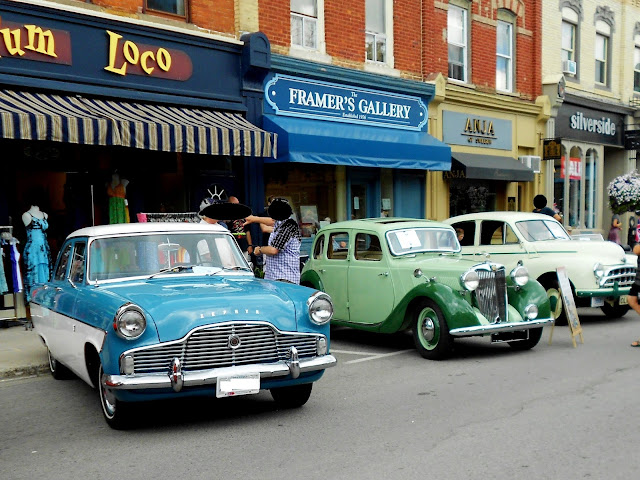 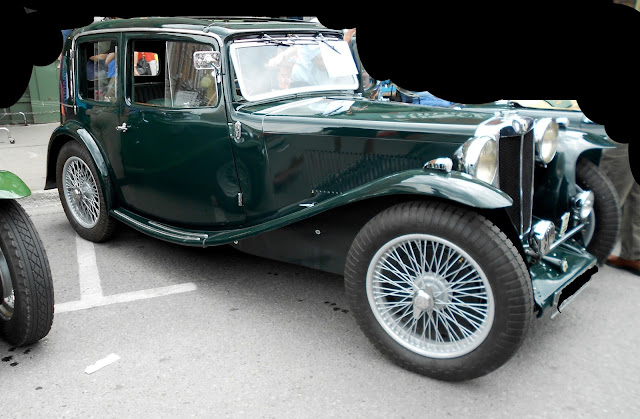 I don't know much about cars, but it was still a lot of fun to check out the different models. There must have been at least a couple hundred vehicles there.

I hope everyone else had an enjoyable weekend! 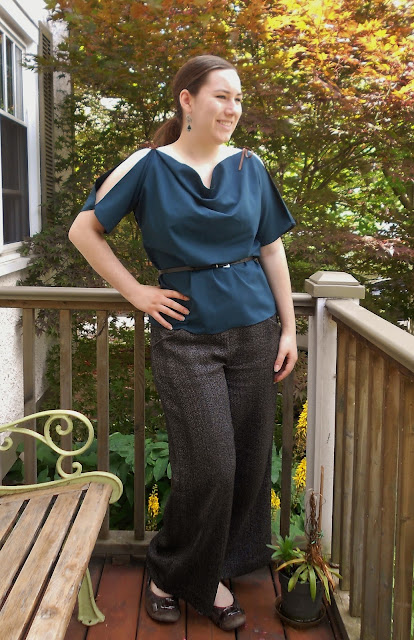 It's been refreshingly cool the last few days. This weather has me yearning for fall and being able to bring out my cosy sweaters again. Any one else craving the autumn season? It is my favourite time of year, especially fashion-wise.

This outfit photo turned out very "autumn-like", but unfortunately the tree behind me has yellow/orange leaves because it is slowly dying. Oh well. It still looks pretty. The blouse I'm wearing was based on a 1920's sweater pattern. I suspect the knitted version would hang a little better, but I still love it.