I know, it's been quite a while since I last posted. This is due to a combination of studying for exams, moving back home for the summer, and coming down with a cold at the most inconvenient time. But exams are over (yay!) so now I am just left with the task of unpacking.

Unpacking sounds much simpler than it is. Or maybe I am just making it more difficult. I seem to have turned unpacking some boxes into rearranging furniture, buying new things and re-organizing everything I own. There will be pictures when I am finished (well, if it turns out alright then there will be. I have too much furniture at the moment and no where to put anything...).
I did buy some new magazines during my last trip to the antiques market before I moved. I will scan them, once I get my scanner set up (which will happen after I actually find my scanner....).
But for now, here are a few pictures I took a long time ago, simply because I can't have a blog post without pictures! 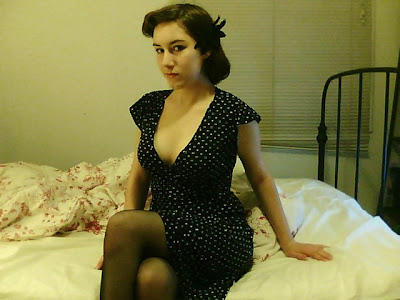 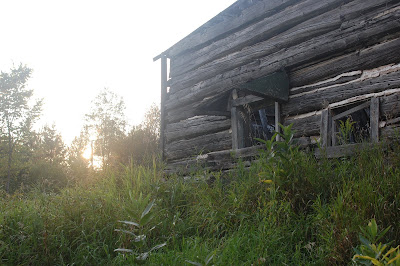 These two pictures (above and below) are of this abandoned farm house near my cottage. I would love to go back there and get more pictures (since the sun was rapidly setting as I tried to get a few snaps last time). 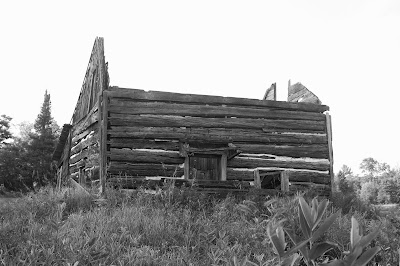 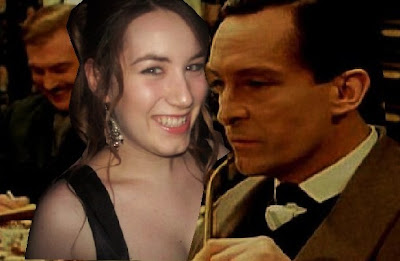 That's right. The last one is a badly photoshopped picture of me hanging out with Sherlock Holmes and Watson. What can I say, I love Sherlock Holmes....

So ready to see the final results of my pincurl efforts with my new haircut? 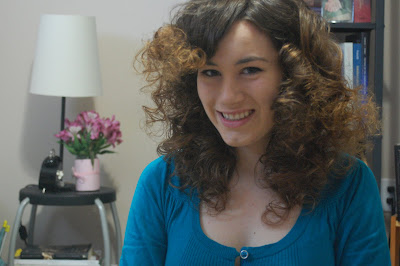 Yes, I know. I look a bit like a poodle. So it didn't turn out nearly as well as hoped. Actually I had worried it might not hold the curl well enough. Turns out it holds it quite well. Too well. I was actually forced to go out with my hair like this since I had an exam review period and no time to de-poof.
On the plus side, it did allow me to test the new recipe I found for hair setting lotion. Link here. It is made from flax seeds that are basically boiled in water. It was a lot thicker than I expected but it really works. My hair held most of that poof all day. Which may or may not be a good thing.... But it didn't make my hair greasy or crunchy like normal hair products.
In other news, I went to the antiques market after my exam. I know I was just there but I figured it was one of my last chances before I move. I ended up scoring some lovely patterns. They cost only about $3.50 each, which is amazing considering last time I was in Fabricland they had new patterns "on sale" for $15 each!!!
The first one I think is from the late 1950's. The other two I know are from the mid-1960's. 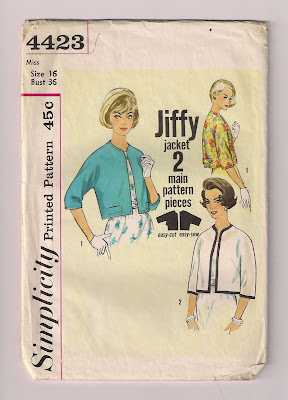 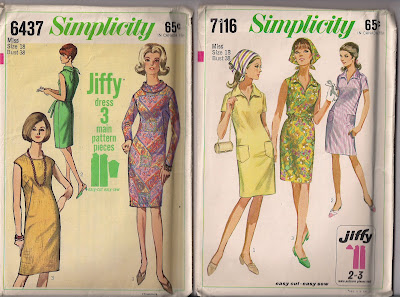 I am quite looking forward to being reunited with my sewing machine. When I get home I am going to hit the fabric store and get some nice new fabric to make something. I may start with the jacket since it looks quite easy and I haven't sewn with a pattern in a while. Normally I just wing it and hope for the best.

I also saw the cutest sewing box at the antique market. I didn't buy it since it was a little pricey and I couldn't figure out how to get it back on the bus with me. I am hoping it is still there when my parents pick me up in a week and a half. I will be heartbroken if it isn't. I couldn't find an exact picture but it looks like a slightly more 1950's version of this:

Results of the haircut

I took before pictures as proof that my hair actually is a lot shorter. It is still long but I cut at least 4 inches off the bottom and added some layering. I like it and am excited to see if it pin-curls any better. My hair actually has a lot more volume now without that excess weight. And it likes to fall slightly over one eye, so perfect for the Veronica Lake look I was trying to go for. Overall, not bad for 10 minutes in the bathroom with a pair of scissors.

It is a little hard to see the haircut in the pictures below due to the fact there isn't enough light in the apartment to use my web-cam for photos but I couldn't get all my hair in the picture with my SLR.
Before: Freakishly long, gross and only wearable if pinned up. 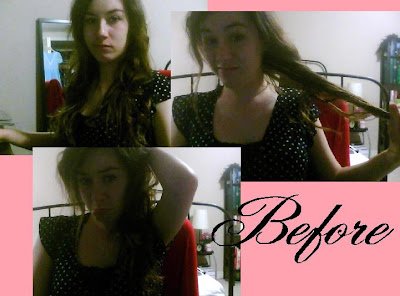 After: Still long but not freakishly so, with more layers. 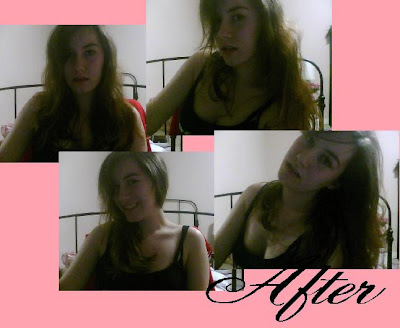 My weekend craft project was this lovely ribbon holder. It was my BFF's idea (link to her blog --->) and is basically just a piece of ribbon strung though the middle of the ribbon spools and then tied to my desk shelf. It works quite well and is expandable as I get more ribbon. 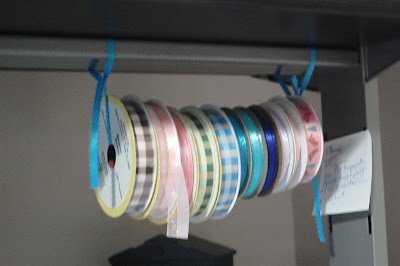 That was basically all I did this weekend other than study for my Applied Math: Differential Equations course exam.

Anyone else listen to Max Raabe? I just discovered him a couple days ago but I love his rather tongue and cheek take on modern songs. His voice reminds me slightly of Rudy Vallee. Here are two of my favourite covers he's done: (first one because I like how it sounds, second one just because it makes me giggle)

So remember that teacup I posted about a couple days ago? Well guess what was 50% off at the Bay... Happy (very) early Birthday to me! I always buy myself one present and this is it for this year. Yeah, that was the only way I could justify buying it....


On the plus side I now have a teacup I can actually drink out of. I have two from my Grandma that she gave me for Christmas. They were wedding gifts she got in the 1940s when she was married. I love them but am way to terrified to even pick them up. They just sit on my shelf and look pretty. My mom says I can have all her teacups too since she never uses them but I am afraid that will have to wait until I move somewhere else, since I don't have the room for all of them at the moment.


Here are the ones my Grandma gave me. The Peacock one is my favourite but I love them both. 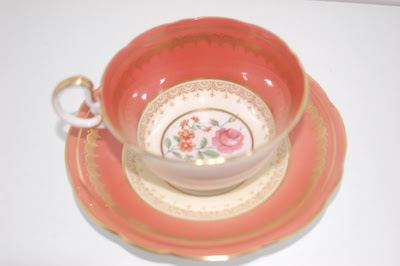 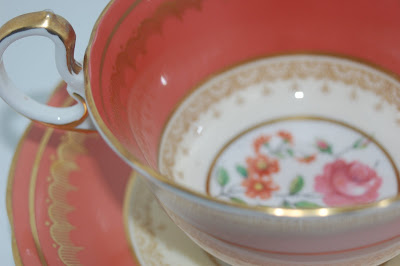 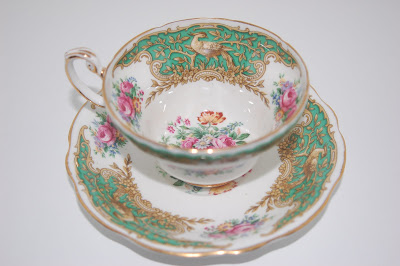 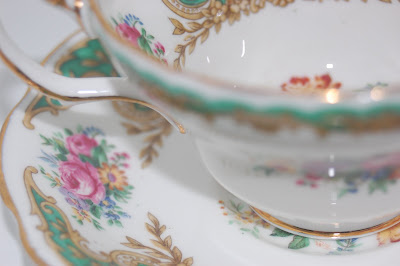 Tea according to Homemakers of Tomorrow (1958) 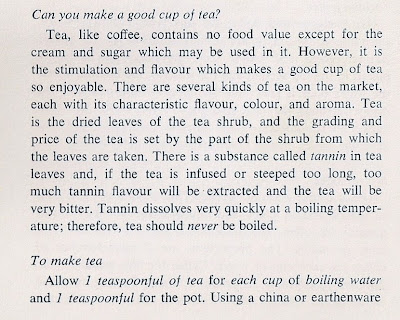 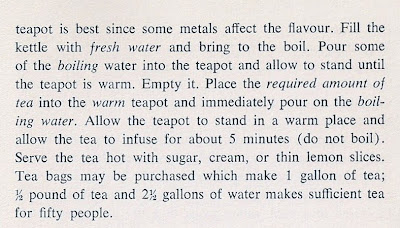 In other news, I am considering cutting my hair. The problem is I am terrified to go too short. I really love short hair but I would want it pin-curled all the time (and I just don't always have the time). I was thinking about going for a Veronica Lake style cut but I plan on trying to cut it myself. This may end badly.

Any suggestions?
Posted by Kate at 6:03 PM 3 comments:

Some songs just make me smile

And this is one of them.

No more classes and a few goodies to celebrate

Today was the last day of classes for this term, so to celebrate I went to the large antique market. I was expecting to pick up a few more postcards and some depression glass but I ended up buying some completely different things. (Apologies for the blurry pictures of me. I need a camera with auto-focus....) 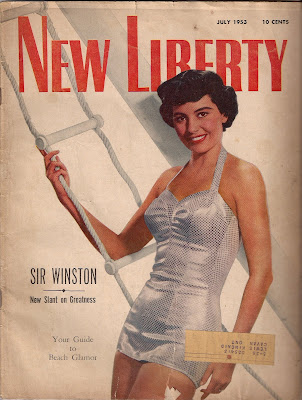 OK so this one isn't too different from my normal purchases. It is a magazine from 1953 and was only $2!!! It does have quite an odor though.... 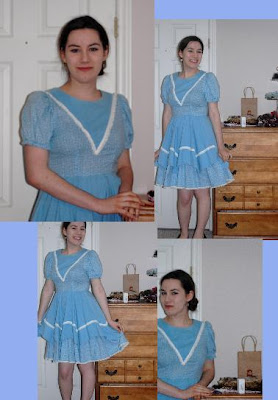 I was so surprised by this little dress. I have never bought (or even seen many) clothes at this antique market before but then I saw this darling dress and I really wanted it. I wasn't sure if it would fit but there was no where to try it on. So I pulled it on over my clothes. A sales lady walked by when it was halfway over my head. I was worried she was going to yell at me but she just laughed and walked away. So end result? Super cute dress for only $25 that fits me perfectly! (I am not sure about its vintage. I think it is handmade but newer than it looks) 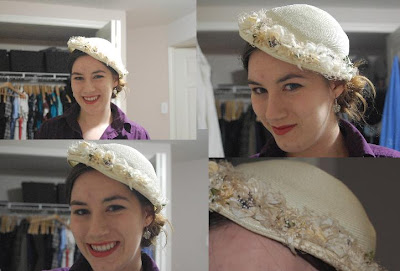 I love this hat! It is from the 1930's and, although not in the best condition, it is completely wearable. For $18 I just couldn't leave it! Now if only I can find a way to keep it from falling off my head.....(it needs an elastic strap or a hat pin or something)


After the antique market, I headed over to the outlet mall across the street. I saw a few cute shoes but figured if they hurt after just a few steps then maybe, just maybe, they might not be good for walking in. But the mall has a Royal Doulton outlet store so I had to stop and drool for a bit. I still couldn't afford anything but this teacup set caught my eye. It is their 1930 Polka Rose 3-Piece Set. No wonder I love it so much. It would make a lovely birthday gift (Mom, you reading this :) ?) 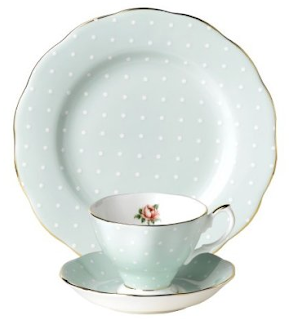 Happy Easter everyone! I was home this weekend so I have lots of pictures to share (of varying degrees of quality...)
Well spring is officially here! The flowers are starting to bloom in the garden. I didn't have space to upload too many pictures but here is one of my favourites from the weekend. 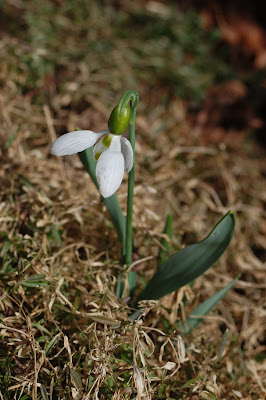 Here are a couple of pictures from Easter Sunday. I was wearing one of the dresses my grandma gave me. It looked stunning but unfortunately the pictures don't show it very well :( I went to church and sat with my grandmother. After the service she showed me off to all her friends. "This is my granddaughter and she is wearing MY dress".
There was one super cute old man that came up to me and said "Sorry, but I am already married". 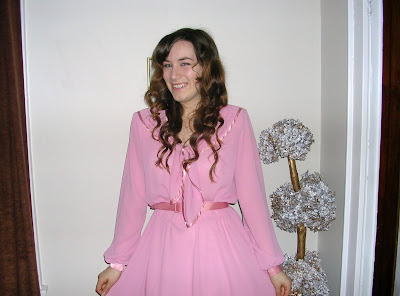 My weekend project was fixing up this old shelf. Well technically it was the top of an old broken bird-feeder but I thought it would make a cute shelf (my dad thought I was crazy lol). Right now it is sitting on top of my other shelf. It may not stay there but I like it. It was a worn country look to it. 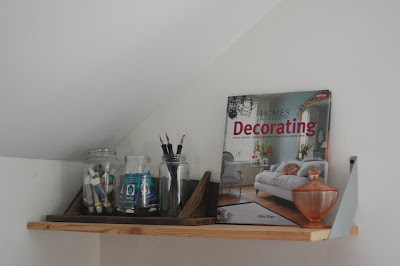 The best part of going home? Seeing my Catsy!!! 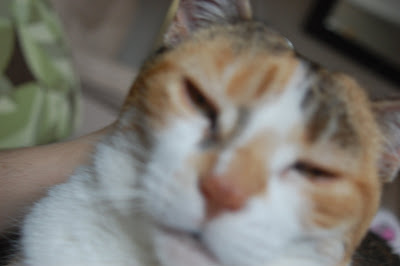